This week has been nuts so I apologies for not posting more. The first crazy fun thing I did this week was go to a table read of Modern Family. My very good friend, getting gooder all the time, Carlos invited me to go with him.

We had a great time at the cocktail party before hand, possible too good of a time. But really the table read was the main event. The cast was great and really seemed to enjoy one another. I'm not allowed to say anything about the script. But as everyone who watches Modern Family knows, it was hysterical. Modern Family premieres Wednesday, Sept. 22.

And if all this wasn't enough, I bumped into Rich Sommer AKA Harry Crane on Mad Men at the event. Unfortunately, he had not been quite as carefree at the bar during the cocktail party, so I wasn't able to get any details about the goings on at Sterling, Cooper, Draper, and Pryce out of him. But, he was incredibly cordial with what I'm sure was his nine millionth fan interruption of the day. The picture is a bit blurry but you get the idea. 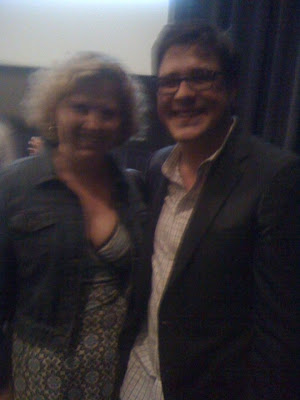