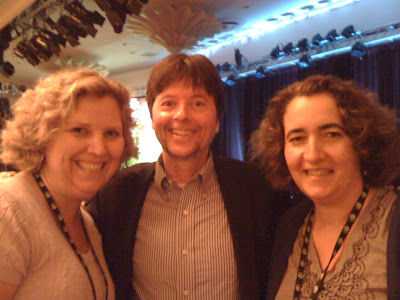 I spent the majority of the last week at TCA, The Television Critic Association. This is a conference where all the TV networks do panels of their upcoming shows for all the television critics. I am not a member, yet, but a few of the networks invited me as their guest, Showtime, PBS, and Discovery. Unfortunately, AMC and TNT were not there this time.
There were lots of fun things that happened, like meeting Ken Burns (pictured above with me and Mar Vista Mom). He was talking about his upcoming PBS show the 10th Inning. I also screwed up my courage to ask Kenneth Branagh a question about his second season of Wallender, also for PBS.
Showtime highlights included The Big C, which I wrote about last week. It really is a great show. I've had a chance to see a few of the episodes. The other show that I'm anxious to see is Episodes with Matt LeBlanc. It looks very funny.
The Discovery Channels, Animal Planet, Planet Green, etc...of course had a myriad of great looking science, animal, and human interest shows that I'll be waiting impatiently for.
I'll be rolling out posts on all the great shows I got to see this week as they get closer to their premiere dates. Sorry again for being MIA last week. But as you can see I was really up to my eyeballs.
Posted by Elise Crane Derby at 10:22 AM

Ken Burns- BooYah! I looooove him. I'm so jealous. I'm looking forward to the 10th inning. I've got Baseball on netflix as I feel I'll need to watch the whole doc. again (for like the 4th time) to get up to speed for the 10th. I've even watched a couple of Civil War episodes on instant recently to feed the addiction. Oh, and his America's First Road Trip is on instant and is wonderful as well. No commitment, it's only a single 2hourish film.
PS. I didn't expect him to be as tall as he looks in the pic. A