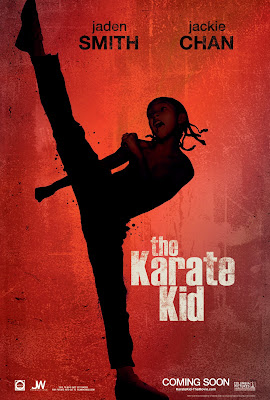 The people at Sony just sent me this trailer of the new Karate Kid movie. Jaden Smith (Will Smith and Jada Pinkett's son) plays Ralph Macchio's former role, and Jackie Chan is in Pat Morita part. I wonder if there'll be any wax on wax off? Jackie Chan is a bit rough looking and I think it's an improvement. I would go so far as to say he's kinda hot.
Any how, here it is. It opens June 11

Posted by Elise Crane Derby at 11:54 AM No comments:

Cats at The Pantages Giveaway 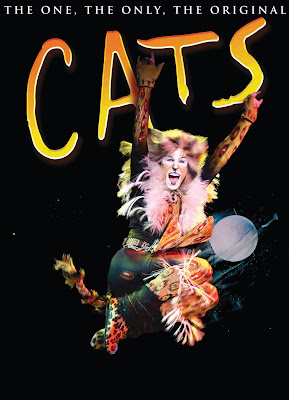 The people at The Pantages Theatre have given me two tickets for the opening night of Cats to have a giveaway with. I love them!!
Anyway, this is a great family show. I actually haven't seen it since I was a teenager. But, of course you always remember Memory and Mr. Mistoffelees.

TO ENTER: Just leave a comment on this post with your email. I would love it if you would become a follower of my blog too, but you don't have too.
All entrants should be in the Los Angeles area, at least on the date of the show.
I'll draw a winner Friday February 26th and announce it as soon as possible.

Just in case you've never seen the show here are some little clips. 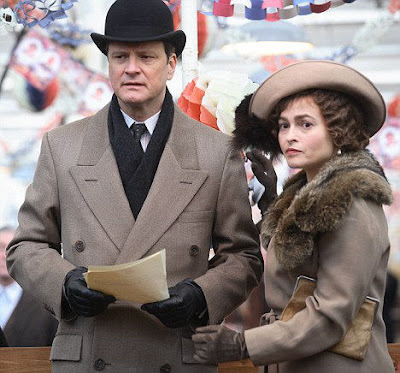 I had a great time last night seeing A Single Man at The Aero in Santa Monica. It really is a fantastic film. Afterward Colin Firth did a Q&A with the somewhat creepy Pete Hammond (that's another story).
Colin was very charming and funny in his very English way. He scandalized the audience by saying he had no great feeling for his portrayal of Mr. Darcy, which I will admit I have never seen. But I do have a general love for all portrayals of Mr. Darcy, he's just a dreamy character.
He talked about another film I've not seen being his breakout in the 80's. The film was called Tumble Down and was about a Falkland Island vet. He said it caused quite a stir in England for it's disdain for their treatment English veterans.
He was very funny talking about how it felt to be nominated for an Oscar saying he was numb, but he was certain he was ecstatic, and he'd let us know in 6 months.
He said the part in A Single Man has really stuck with him, and he still hasn't been able to completely shake it.
Finally, he talked about his up coming film King Speech about George VI. Which co-star Helena Bonham Carter and Geoffrey Rush. Which also looks fascinating.
Posted by Elise Crane Derby at 2:51 PM 5 comments:

My Cousin's wife Leigh Ann recently posted to facebook that she is riding in a bike race to benefit The National MS Society. So I asked her to send me a note, so I could post all the details here.
I just want to spread the word if any of you feel compelled to donate.
Thanks,
Elise

I ride the BP MS 150 from Houston to Austin every April. This will be my 8th time to participate in the fundraising (7th to ride because one year I broke my arm in March ice skating with Anna). Anyway, I started doing it after Ellen was born for the challenge and because my college roommate had been diagnosed with MS a couple of years prior. I have a lot of fun preparing for and completing the ride. Each year is different somehow. Like last year, we had torrential rains that caused the first day to be canceled (1st time in 25 years!). The year before that, the wind was blowing so hard in our faces that I had to do a huge amount of self-talk just to finish. It took an extra 3 hours on the bike that year. We are due some happy riding weather this year . . .

www.nationalmssociety.org then choose Bike MS, then Bike MS: BP MS 150
or for my personal page click here.
Thanks for helping me!
Leigh Ann
Posted by Elise Crane Derby at 3:42 PM 24 comments:

The Female of The Species at The Geffen Playhouse

The other night I went to see The Female of The Species at The Geffen Playhouse. The show stars Annette Bening as a "Gloria Steinem" type feminist writer. The rest of the cast includes, Julian Sands, David Arquette, Josh Stramberg, Mirelle Enos, and Merritt Wever(who it took me a while to place, but then remembered she's the new nurse on "Nurse Jackie").

The show is really funny while tracking the ups and downs of the feminist movement over the last 50 years. I can't say I agreed with all of the opinions put forth by the characters, but they did make me laugh. In fact the whole audience was practically rolling in the aisles.

The dialogue is great and there are several long speeches by various characters that are masterfully performed. Annette Bening's characters daughter gives one about motherhood that was brilliant, just to name one.

The whole cast is a bit hysterical throughout the show almost in a mad cap comedy way. Long story short, I highly recommend the show. I saw it with my mother and we both enjoyed it tremendously. So it's fun for the whole family, except young kids, I wouldn't bring them.
Posted by Elise Crane Derby at 12:39 PM No comments:

Email ThisBlogThis!Share to TwitterShare to FacebookShare to Pinterest
Labels: Elise Crane Derby, Geffen Playhouse, The Female of the species

I was lucky enough to be invited to the PBS press tour this year and meet the amazing Gates. I really love his programs. African American Lives and Looking for Lincoln were such great shows. PBS gave me one of the episodes of Faces of America that will run every Wednesday from Feb 10 through March 3, and it is as fascinating as African American lives was.
Definitely check this out tonight!

Here's another clip of Gates talking about the series. As a note I was in the room while this was being taped. Which was crazy exciting for me.

OK if you loved independent Amelia flying around the world, you'll love this Roller Derby movie directed by my girl crush Drew Barrymore (SHHH don't tell Sandra Bullock)
Whip It is a great movie about a young girl's dream to be a roller derby queen not a pageant queen, which is what her mother is pushing for.
The cast is a mix of familiar faces and new comers, all brilliant. I have to say that Andrew Wilson, as the derby coach, may have finally surpassed his brothers in my affections with this part.

TO ENTER:
I have three copies of the DVD to giveaway, courtesy of 20th Century Fox. Just leave a comment with an email on this post. I'll pick the winners with Random.com this Friday, Febuary 12th.

WINNERS:
We have our winners: Kim, Mindy, and Jamscout425. Stay tuned I'll be running a giveaway for The Fantastic Mr. Fox next week. Once again Good Luck!
Posted by Elise Crane Derby at 12:58 PM 22 comments: 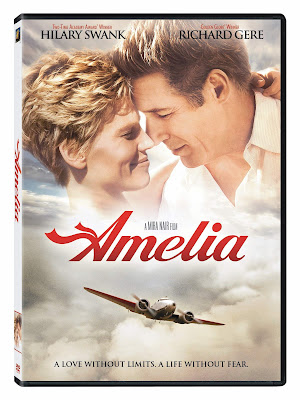 THE WINNERS!!!!!!!!!!
Krista, Amy, and Mami2jcn
Thanks for playing peeps. Don't be sad if you didn't win I've got a great DVD giveaway coming later today.
Posted by Elise Crane Derby at 9:38 AM 8 comments:

This morning while doing my daughters hair for school, this came on Sesame Street. LOVE IT!!!!! I may be deep in withdrawl, because this was way too exciting for me.
Hope you like it as much as I did. 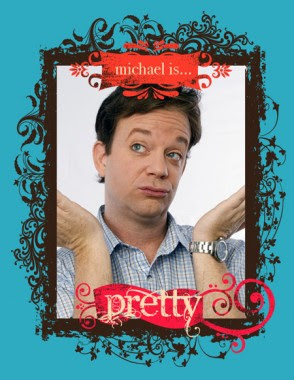 Here's a new web series called Pretty. It's about a Pageant family, but a really weird pageant family. This family makes Little Miss Sunshine's family look like the Brady Bunch. OK? This is a REALLY odd web series. I don't know how I feel about it but I feel compelled to pass it on. It is funny to me, but I think that might mean something is deeply wrong with me. Check it out and see how you feel about it and report back.
Posted by Elise Crane Derby at 11:26 AM 8 comments: