Well here it is our last ever Mad Men Poster. Don is driving off into the sunset glancing in his rear view mirror. If we really wanna pick it a part his collar is loosened. I'm hoping this is an indication that he is free of all his lies and is moving on to the real Dick Whitman/ Don Draper.

OK I admit I blew it up and tried to figure out what was reflected in the back of the side view mirror. Could be a train or a plane..or really anything. It's probably nothing but I want clues! We have 5 weeks  to wonder and then 7 episodes to find out.

Just for "Nostalgia" sake here are all the past posters.


Posted by Elise Crane Derby at 3:32 PM No comments:


Mad Men returns for it's final episodes April 5th. It's heart breaking to think of it ending but I also can't wait to see how this all wraps up.

At the TV Critics press panel the cast said they were all pretty happy with their characters developement. But of course gave no further detail on what we could expect.

This new trailer has just been released and it looks like they're all at a lovely garden party, with a distinct possibility of a key party breaking out at any time.


The song is Love Hangover which was a big hit for Diana Ross in 1976. Could this mean a big jump forward in time for these last episodes?? Or was it just the perfect song?? Can't wait to find out!

More Mad Men Photos
Posted by Elise Crane Derby at 8:46 AM No comments:


I am so stoked to see Cameron Crowe's new film, ALOHA. I don't even have to know what it is because I trust him to make something I will love. Have we had some misses? Yes, but I am still true to him and Aaron Sorkin. They seem fine with sharing me.

As it turns out Aloha has an epic cast with, starting with the cast member I'm most excited about, Bill Murry, then in no particular order Bradley Cooper, Emma Stone, Rachel McAdams, and John Krasinski. Kind of a dream team, right?

The story according to the studio: In Aloha, a celebrated military contractor (Bradley Cooper) returns to the site of his greatest career triumphs - the US Space program in Honolulu, Hawaii - and reconnects with a long-ago love (Rachel McAdams) while unexpectedly falling for the hard-charging Air Force watchdog (Emma Stone) assigned to him.

It opens May 29th and based on the trailer I have a feeling it will be huge. So get advance tickets.


The music is great in this trailer, no surprise that Cameron has great taste in music. It's Cold War Kids and the song is called First.

Posted by Elise Crane Derby at 5:48 PM No comments:

15 TV Shows To Get You Through To Summer #TV


There's a whole new crop of shows, plus some returning favorites, coming over the next few months. Some of the shows on this list are sure things, as far as I'm concerned, and other may be wishful thinking. one thing is for certain, the level of actor drawn to TV these days is really impressive. I'm sure there will still be misses but I'm guessing not because they couldn't get a stellar cast. These shows have so many Oscar nominees it should shame the film industry into creating better work.


Check out the trailers and tell me if you don't agree. We gotta check these out!

Posted by Elise Crane Derby at 10:09 AM No comments: 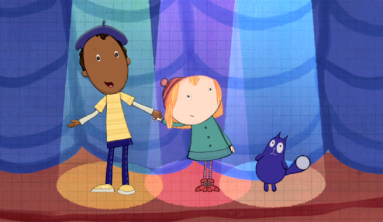 Beginning March 2 PBS Kids Peg + Cat is going musical. Well at least they'll be musically influenced new episodes. They'll be running the gambit from the "groovy" sixties to Radio City Musical Hall. Music is such a great way to teach math concepts. My daughter is in 5th grade now and I know learning about music has helped her immeasurably (har har) with all the fraction work they do.

Here's the full run down of the new Peg + Cat episodes

“The Allergy Problem/I Do What I Can: The Musical!” – Premieres Monday, March 2, 2015
· The Allergy Problem - When Peg is told she's allergic to Cat, Cat leaves home! Ramone flies Peg around the world in his flying machine that runs on 100 pebbles, in search of her friend.
· I Do What I Can: The Musical! - Peg and Cat present a Broadway musical about the amazing Ramone, who became a hero by doing 30 great things, 5 at a time.

“The Roxanne Problem/The Girl Group Problem” - Premieres Tuesday, March 3, 2015
· The Roxanne Problem - Cat longs to impress the savvy Roxanne with his knowledge of solid shapes. So he moves his lips as his hidden friend Peg speaks for him.
· The Girl Group Problem - Peg's girl group the Pentagirls has its biggest show ever, featuring a new hit song about flips, slides, and turns.

“The Groovy Sixties Problem/Bad Jack is Back” - Premieres Wednesday, March 4, 2015
· The Groovy Sixties Problem - Peg and Cat help Peg's hippy Grandmom create a groovy birthday present for Granddad based on his favorite numbers: the sixties.
· Bad Jack is Back - When Bad Jack returns with his gang to tickle the townspeople, a surprise guest shows Peg and Cat how to fend off the bad guys' six feathers with four feathers.

“The Magic Uke/The Rocking Out Problem” - Premieres Thursday, March 5, 2015
· The Magic Uke - Peg must trek through the Kingdom of Night to reach Cat. To cross the star-shaped steps, Peg needs to find lines of symmetry with the help of a magic ukulele.
· The Rocking Out Problem - When Baby Fox makes a spectacular musical instrument out of junk, Peg and Cat get stuck in it! To get out they use up, down, around and 3/4 time.

You can also enjoy PBS Kids on their new YouTube channel aimed at kids 2-8 and their parents. Now you can see all you and your kids favs anytime you want! The channel includes hundreds of clips and promotional videos from popular PBS KIDS series, such as DANIEL TIGER’S NEIGHBORHOOD, PEG + CAT, WILD KRATTS, ARTHUR, MARTHA SPEAKS, WORDGIRL and PBS KIDS’ newest series, ODD SQUAD. In addition, viewers can watch full episodes on YouTube from web original series, including FIZZY’S LUNCH LAB, OH NOAH!, RUFF RUFFMAN: HUMBLE MEDIA GENIUS, CHUCK VANDERCHUCK’S “SOMETHING SOMETHING” EXPLOSION and PLUM LANDING. New content will be added to the channel weekly.

Posted by Elise Crane Derby at 1:05 PM No comments:

I love a George Clooney movie. Looking forward to seeing this one with my daughter this May 22nd!

George plays a disillusioned scientist paired with a scientifically enthusiastic young girl (Britt Robertson). They find themselves on an adventure, in what looks like time travel, but don't quote me on that. Based on the trailer I'm pretty confident my little Whovian will love it.

If you really want to stay on top of all the news for Tomorrowland.  Disney and Google have partnered to create Take Me To Tomorrowland, a multi-sensorial teaser experience on both mobile and desktop. Please visit the site at TakeMeToTomorrowland.com or use Google Voice Search technology (“OK Google, Take me to Tomorrowland") for your first in-depth glimpse of Tomorrowland. The full site launches this spring, and will transport audiences into an unprecedented 360° Tomorrowland environment.

Posted by Elise Crane Derby at 1:02 PM No comments: