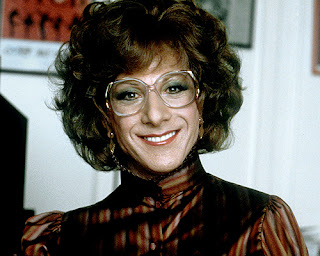 Every day another of my friends on Facebook posts the video below of Dustin Hoffman, with praise for his statements in it. I have to say I don't get it. Hoffman essentially says while making Tootsie he had an epiphany that he had missed out on friendship with interesting women he didn't find attractive, because apparently he only talked to women he found attractive???

To be clear I'm glad that he had the clarity to come to the realization, but I can't believe he is being praised for being such a neandrathal. I recognize that Mr. Hoffman is from my parents generation, and chauvanism was much more rampant in those days. But did he really ignore every woman he wasn't interested in dating? What an ass.

To turn the tables. Because I am about 5 foot 9 inches, I've never dated men under 6 feet. That's my brain washing, I want to be able to wear heals and in a couple the man should be taller, it makes no logical sense but there it is. If I were to say I just realized that men under six feet (which would include Hoffman) have something interesting to add to the world, wouldn't everyone just look at me and say "duh".

I'm sorry Dustin, I love your movies, but I just can't give it to you on this one.

Post Script: As a dear friend of my mother informed my sister and I at a bar mitzvah, where we were lamenting being taller than all the boys "they're all the same height in bed." More good advice I never adhered to.

Posted by Elise Crane Derby at 9:39 AM

Having worked with Mr. Hoffman years ago, I can assure you - he just that big of an ass and more so, probably. I had the same reaction to everyone loving the video.

I'm glad someone agrees with me. I think we may be the only two.

I'll jump on board the agreement train!