Just home from the first day of the Second TCM Classic film Fest and too tired to do more than post picture from the red carpet. Will try to get video up tomorrow.
Leslie Caron, Peter O'Toole, Ann Rutherford and Ann Jefferies, and Mickey Rooney in that order. There were many more but these are some of the high lights.
Enjoy!! 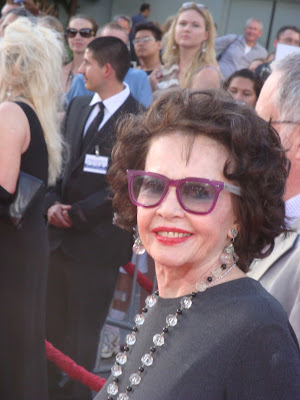 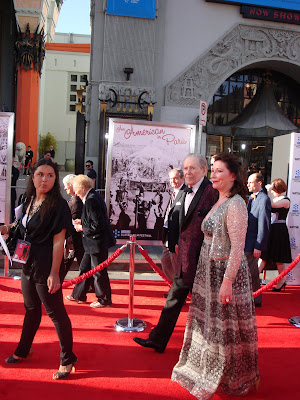 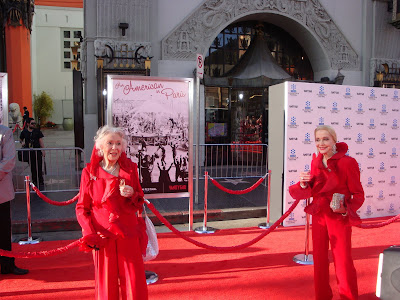 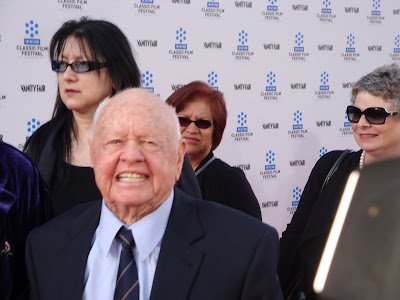 Posted by Elise Crane Derby at 10:34 PM No comments:

God of Carnage at The Ahmanson 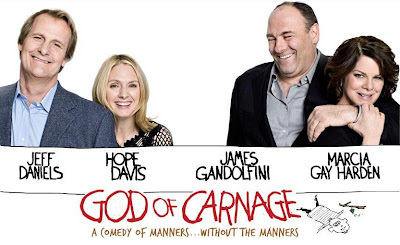 Last night I went to the opening night of Tony award winning God of Carnage at the Ahmanson as a guest of the Center Theatre Group. It was great. I have no idea how they'll keep up the energy level for the entire run through May 29th. But I may have to see it again so I'll have an opportunity to find out.
I highly recommend this play to anyone who is in the process of raising a child and maintaining a marriage. Pretty much everyone of your emotions will be played out in front of you from your best to worst moments and in that order.
Even if you're not a parent it is an amazing piece of theatre performed by the spectacular original Broadway cast of Hope Davis, Jeff Daniels, Marcia Gay Hardin, and James Gandolfini.
Do your best to see this show, you will thank me...trust me.
Posted by Elise Crane Derby at 2:39 PM 1 comment:

From Here To Eternity in LA on The Road to Hollywood

Next Thursday TCM's Road to Hollywood comes to LA with From Here to Eternity. See the below press release for all the details. But if you don't get into this show don't worry because the TCm Classic Film Festival starts in just 2 weeks and even if you don't buy tickets to the whole festival you can go to individual screenings. Check out TCM's Classic Film Festival site for all the details.

Host a Free Screening of From Here to Eternity

Screening to be Presented by TCM and Time Warner Cable as Part of Road to Hollywood Tour,

What: TCM and Time Warner Cable will present a screening of the classic, From Here to Eternity. The screening will be preceded by a short Q&A session with the legendary actor and the TCM host.

Where: American Cinematheque at the Egyptian

Passes: Although the screening is free, passes are required for entry. Free passes can be obtained online at http://www.tcm.com/roadtohollywood. Passes available beginning April 7.
Posted by Elise Crane Derby at 9:10 AM 3 comments:

Email ThisBlogThis!Share to TwitterShare to FacebookShare to Pinterest
Labels: Elise Crane Derby, From Here To Eternity, LA, TCM, The Road to Hollywood 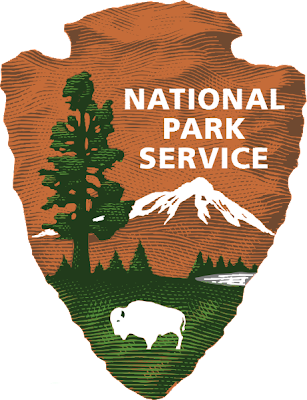 With a federal shutdown looming, we're all worried about how it will affect us and the country. One effect for my family will be our spring break. We have planned a week long trip to the national parks in the southwest. Well, guess what? If there's a federal shutdown, those national parks will be closed.
Beyond my own selfish reasons, there are all the businesses around the parks that will be effected. Spring break is probably most of their first flush weeks after the slow winter season. I hope they have a hole left in their belts to tighten to till summer.
Let's all hope the government figures out who they want to screw and for how much soon or maybe they could get the corporations to pay their taxes. Whatever the solution, figure it out before my spring break, Please!
Posted by Elise Crane Derby at 9:08 AM No comments: