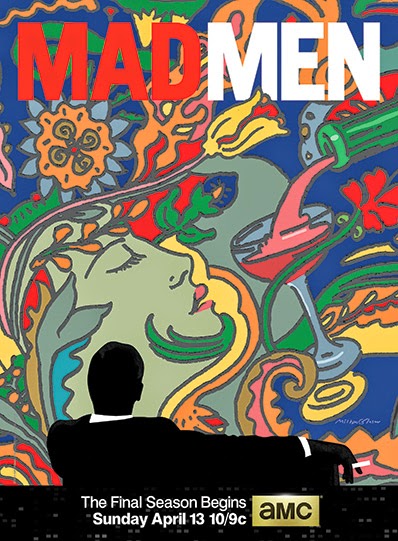 Field Trip was the 3rd episode of season 7 of Mad Men, it could have been called rejection tour. Every single character is dealing with being told no. With varying degrees of style and confidence.

First we see Peggy is upset about not getting nominated for a Cleo, while Ginsberg and Stan are. It turns out that Lou hadn't even submitted her St. Johns/Rosemary Baby ad. Lou says it was Cutler that didn't want to submit it, but really it was just Lou not wanting to submit any work that predated him at the agency. Beside the point, that I think Lou just wants to push Peggy down and build up the guys. Another sexist hurdle for Peggy to deal with.

Megan is getting the most direct rejection in Hollywood. She's handling it so badly that her agent is calling Don to help her get it under control. Which was probably the wrong move. Since Don is the one who is making her the most insecure. Still he runs out to LA to try and build her up. He ends up telling her about his leave from the agency. It may be the last straw for Megan, that he's chosen to stay in New York, when he could have been in LA with her.

We find Betty having lunch with her old buddy Francine who is telling her all about her exciting life as a travel agent, now that the kids are getting older. Betty tries to maintain her happy homemaker persona but you can see the wheels spinning. As soon as she gets home she throws herself into her mothering role by volunteering to go on Bobby's field trip. It seems like the trip is going well, smoking on the school bus, drinking cows milk from a bucket, then Bobby accidentally trades Betty's sandwich for some gum drops and Betty takes it as the ultimate insult. With the amount of guilt she lays on him, that kid will never be able to eat another sandwich. Later Betty tells Henry that the kids don't love her??? Because a kid obliviously gave your sandwich away???

Finally,  Don pulls the trigger with Dave Wooster and gets an offer from his firm to jump ship. Don takes the offer directly to Roger. After a bit of "How dare you not stand up for me" and "You were begging for it" ending with Roger admitting he misses Don. Roger says come back. Sadly Roger neglects to tell any of the other partners about this. Don ends up spending the whole day waiting around in the office, how humiliating. Even though none of the other partners seem to want him back when Roger points out that they will have to buy him out and that they will now be competing against Don for accounts, they come around. But they make him sign a contract that says if he misbehaves they will absorb his shares and he will have to report to Lou. I was shocked Don didn't haggle this more but he just said OK. You get the feeling though he knows he can win them all over again. Once he's making his amazing ads.

I think it will be Lou's raison d'etre to keep Don down, which should move Peggy out of his sights, at least. I don't think it will take Don long to send Lou packing with his tiki bar. Still it should be interesting to watch them jockey for position.

Every time they're in LA and you see the sky line through a window they fill it with orange smog.

The woman (Emily Arnett) who approaches Don at the dinner with Wooster. Perhaps Wooster is just lying about not getting her or maybe it was just an opportunity to show us how much Don has changed. He is saying no to all the girls.

Stan so wants Peggy. Putting out his hand to help her up when they are talking about the Cleo.

The agency needs to balance it's business side and art side they always seem heavy one way or another. Harry can't get the computer he needs. Cutler thinks having Lou, who is only "adequate" by his own description, is fine? Ted is totally off his game in California and Peggy is being shut down by Lou.

Megan stalking a director having lunch with Rod Serling at the Brentwood Country Mart.

The final song Jimi Hendrix If 6 Was 9.

Hi Elise...i been watching u every week on the video but i keep forgetting to read ur blog...and it was awesome...

u have a good way with ur words and u seem to Love MM very much as we all do...

i been loving ur insights on the show and continue to entertain us every week..Thank you so much...

Aww...Thanks so much. I do love it and talking about it. Thanks for letting me know you enjoyed it.