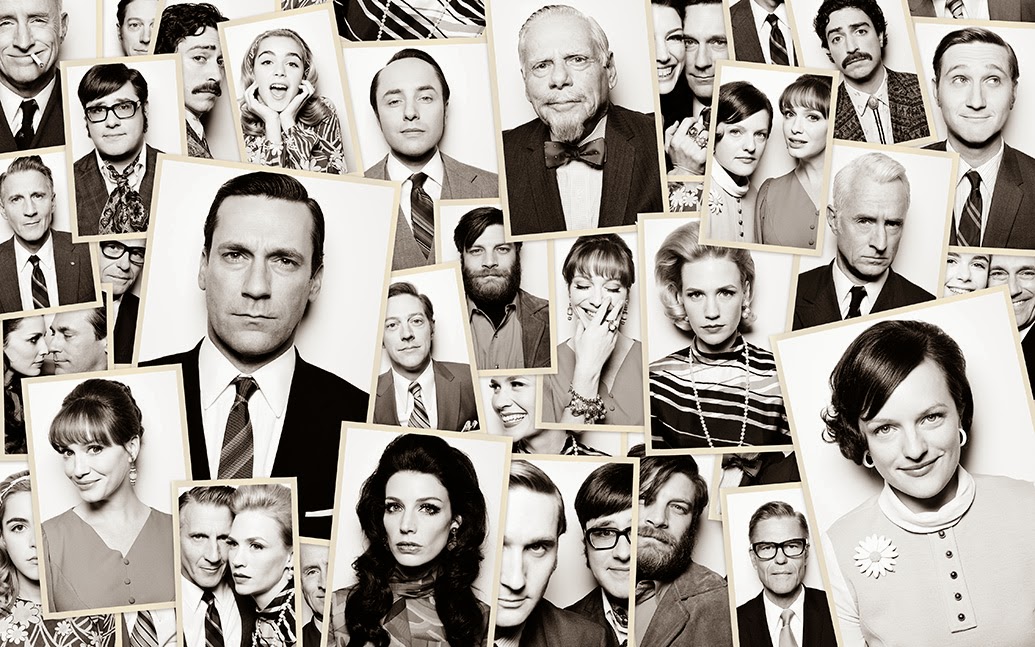 Last night's Mad Men (season 7 episode 2) A Day's Work was, mostly, another experience of people not getting what they want or having it whipped away from their grasp at the last moment. Pete manages to sign up the Southern California Chevy dealers only to have the New York office decide that it all needs to be run by the bigger client that is Chevy itself, which means Bob Benson. I have to say Pete's girlfriend, Bonnie Whiteside, is another great woman for him. Her pep talk about how their fortunes are not in their hands and the fun is trying to get it away from those who are in charge is brilliant and totally talks him down from his tantrum.

The episode starts with Don's kind of pathetic day of sleeping in till noon even though his alarm goes off at 7:30 still. Once he finally does get up it's a day of ritz crackers and Little Rascals episodes. The further degradation of his once perfect white carpet apartment, that last week had broken sliding doors, now continues with the introduction of a cockroach. We get it guys his life is falling apart. He does finally get up and get dressed and we think he might have somewhere to be but turns out he's just making himself look good for his secretary Dawns visit, which informs us that indeed Don is keeping Megan in the dark about his "leave" from the firm.

The next day is Valentines day at the office. We find Ginsberg, Stan and Peggy in the elevator. Peggy obviously doesn't realize it's Valentines day and Ginsberg is happy to turn the knife in her when they inform her. Stan seems to want to be light about it, making a comment about her cat not being able to afford to send her flowers. I think Stan has a little (possibly very little) torch for Peggy. He smiles at her warmly and tries to joke around with her, until she comes back with lines like" Is this a joke because I don't want to have to fire you later." Which freezes him up and returns him to calling her boss.

I love the camaraderie between Dawn and Shirley. That they call each other by the others name is hysterical. I presume everyone in the office mixes them up frequently enough that they have gotten use to answering to either name. It's a great way to show all of that without having to film a frame of it. Just put them in a room together and have Dawn say "Hi Dawn" to Shirley and vice versa and all of the rest is there.

Lou showed what an insecure jerk he was this episode. I think he is pretty threatened by Don, or just incredibly self centered that his secretary might have stronger ties to Don then him, that he has her removed. Either way I think everyone dislikes him and no one will be sad to see him go when, I predict, Don makes his triumphant return.

On an up note Joan finally is released from her duties as office manager and joins the partners up stairs in a new office. Cutler, of all people, notices Joan juggling her duties trying to reassign secretaries for all manner of petty reasons and realizes she should be focusing on her accounts. This ends up solving several issues. Dawn, who Lou doesn't want on his desk, becomes office manager. Shirley who has had a misunderstanding with Peggy moves to Lou and all is right with the world. Of course this leave room for some new secretaries to be hired, I think Peggy is still without one???

Finally, the whole Don and Sally relationship took a turn this week. Sally's unannounced stop by the office reveals to her that her father has been excused from his duties there, which allows her to feel sorry for him and let go of some of the anger she is justified in having. Sally is clearly not happy with either of her parents. The line about being willing to stay in school till 1975 if it would put Betty in the ground, left no doubt about that.  Sally is still struggling with her own identity. Later while stopping at the coffee shop with Don, I loved when she says she only went to her roommate's mother funeral to go shopping, and when Don says he doesn't think that's true she says "I'm so many people" Don's face is so still with just the slightest wince in the eyes. I think that one hit close to home for him. In the end when her father tells her that he has blown it and he is trying to make it up to his partners and that he doesn't even know how to go about it, she softens to him, even telling him "I love you" when he drops her off at school.

For more on last nights episode I'll be recording the Mad Men Podcast on Wednesday night. Check back here for the link and then Youtube embed.

Last, but not least, here is the video of the Turtles song Elenore (who spells it like that?) that is playing in the car while Don is driving Sally back to school. This song was meant to be a spoof of poppy songs but ended up so good it made it to number 6 on the top 100 charts. Make of that what you will.