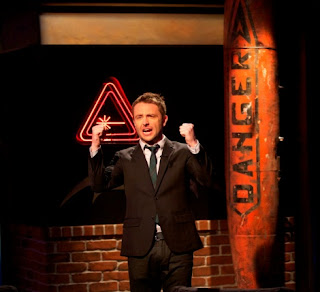 This Saturday Jon Hamm from Mad Men will be the guest on The Nerdist on BBC America, along with Betsy Brandt from “Breaking Bad” and Rich Summers (Harry Crane from Mad Men).

I was (totally stoked) very happy to be at the taping of this show. So look for me in the audience. Jon Hamm was his usual ridiculous self. How this man ended up finding fame in a character as unfunny as Don Draper, I have no idea. The whole taping was hysterical, but pretty blue. So much so that I'm a bit curious how they are a. going to edit it for television , and b. cut it down short enough for the segment. Thank god that's not my problem.

If I have any criticism of this show it would be the set. I know last season's set was strictly public access TV, but I liked it. Now it is very smooth and professional. Oh well, it still has the rest of it's components so I won't start a letter writing campaign just yet.