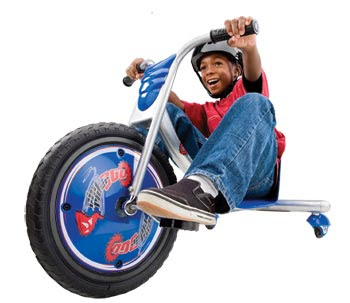 WINNER:Melanie is our winner! Congratulations. As soon as you get me your address we'll get it in the mail.
Posted by Elise Crane Derby at 3:24 PM

Oh, this reminds me of a very cool GreenMachine that my brother and I used to ride around town. Very cool!

There was a Razor event?! OMG, would my boys be jealous!

Rip roaring fun! My kids would love this Razor, we're a Razor family!

My son would probably faint if this showed up at our house. Seriously.

What a great bike! My boys would love it.

Woo hoo! My twins would fight over this for sure!

oh MY GOSH!! My kids would go batty over this thing, and to be honest, I've NEVER seen one in my life!!

Looks like an awesome ride! My boys would be thrilled and I would hit cool mom status :) Thanks for the chance!

Very cool! I think my daughter would have fun with it!

we saw this at the chicago toy and game fair--i think all three of my kids would enjoy this!

My sons would love this. Glad to see it holds up to 160 pounds so I can ride it too!

I'd love to give this to my grandsons. What a great giveaway, thank you Elise!

Agh, just saw I forgot to include my email address, sorry about the oversight!

Wouldn't the kids just love it. Razor keeps coming up with such cool new ideas.Could just see my grandson on it.