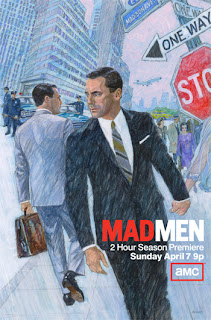 After a brief moment of someone being resuscitated  we open right up with Don reading Dante's Inferno "Midway on our life's journey I went astray from the straight road and woke to find myself alone in a dark wood." Is there a better description of Don?

Megan and Don are on the beach in Hawaii (for a hotel client) and throughout the scenes on the vacation Megan's wardrobe reminded me of Betty's in Italy (for a hotel client). First she was wearing red ball earrings that looked a lot like the ones Betty wore when she was all dressed up in her black fringe in Italy. Then the next morning she puts on a dress that looks like the one Betty wears the day they get back from Italy. Looks like things have fallen into old patterns.(no pun intended) He's even sleeping with someone on the side.

Megan has landed a part on a soap opera. She's recognized by fans. By the end of the show her part has been expanded and she is going to be the character everyone loves to hate. I'm guessing she's going to be too busy to deal with home life.

We see Betty looking like she is trying to be, or at least look like, her mother in law. She spends a lot of the episode worrying about Sally's friend who runs off to the city. It may be that she sees herself in this character, who wants to go to the city and have an exciting life. That's what Betty did and then married Don and we all know how well that worked out. She even goes into the city and spends an odd day in a flop house. In the end she seems to decide to let the girl go and completes her transformation into her mother in law by dying her hair brown.

Roger comes back to us in a therapy session. He seems like he wants answers but then he seems pretty sure about life being meaningless. All women are the same and all relationships leave you unchanged. Even with the news that his mother has died he's unfazed.  Only at the end of the episode does he break down over a shoe shine box that his, also deceased, shine guy's family has sent to him, since he's the only one that's asked about him. Roger's party seems to have come to an end. He may need some more acid?

While in Hawaii Don meets a private whose getting married and ends up giving the bride away. Some how their military issue zippos get switched. The private's has the inscription "In life we often have to do things that just are not our bag." Apparently, a common phrase inscribed on Vietnam vets zippos. I don't know if Don has ever figured out what his bag is. But regardless, he can't get rid of it fast enough. He tries to throw it away, but it gets returned. In the end he lies to his secretary and says he found it and ask her to try to return it.

Don shows up drunk at Roger's mother's funeral and while a friend talks about how much Roger's mother loved him to the exclusion of anyone else Don pukes into an umbrella stand. It may just be the liquor but I think it was a least a little about the fact that no one has ever loved him like that. He has never believed that anyone would love him just for himself, that someone would truly be his. To himself he will always be a whore child.

In the end Don pitches the hotel client an ad that looks like someone walking into the ocean to kill them self. The tag line was equally awful, "Hawaii The Jumping Off Point . I hope we aren't facing another season of the constantly plastered Draper who can't do his job.

Mostly the episode just kept coming back around to death beginning with what turns out to be their doorman being resuscitated. then the death of Roger's mother and shine guy, and of course Don's suicide in Hawaii pitch. Thing are off to a dark start.

There seems to be someone sleeping on the couch in every scene in the work room at SCDP.

Peggy is still doing a great job but has her staff scared of her.

Roger mentions From Here To Eternity, which starred Donna Reed, and then later we see Don watching The Donna Reed show.


For all my Mad Men posts

Wow, great analysis. I didn't think of any of it that hard but now that you mention it...yeah.