Best Camera To Take on Safari 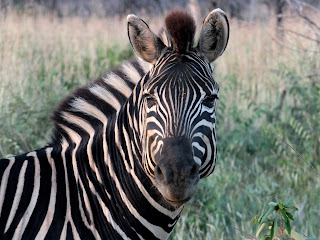 I had my husband write up this review of our camera, Fuji X-S1, for the safari. I think he gives some great insight into picking a camera for safari. Hope it's helpful.

Fuji  X-S1 Camera Review By a Novice  – The Right SLR Style Camera for a Safari, and Every Other Important Picture Taking Opportunity

How We Got the Chance to Use the Fuji X-S1 Camera
Eight months ago, our family was invited to go on an African safari trip.  We said yes, and immediately I began thinking about cameras.

Two years prior, I bought a Nikon D5000 SLR camera before a trip to Yellowstone National Park.  The pictures that I took were great compared to my pocket camera, but the Nikon had big setbacks.
* It came with two lenses, one zoom lens for wider angles, and a second zoom lens for telephoto shots.  I found that swapping the lenses on a regular basis was not easy, and required the use of a fanny pack to carry the extra lens.
*Another setback was the built-in flash.  It did a poor job of lighting inside and night photos for any subject over 12’ away.  I finally bought an external flash, but then I had a third item to carry.
*The Nikon D5000 also had a very long lag time between pressing the shutter and having the camera take the picture (2 to 10 seconds), when using the lcd panel instead of the viewfinder.  I found myself always using the viewfinder.

The thought of going on an African safari made me think about replacing our Nikon camera.  I began reading reviews of cameras that were used on safaris.  I found out that there were high performance cameras that had fixed lenses with incredible zooming capabilities.  Nikon makes a couple models, and I seriously considered buying one, because I was already use to the Nikon controls.  At around that time, our cousin offered to loan us a Fuji fixed lens SLR style camera for our trip (she works at Fuji).

How the Fuji X-S1 Camera Performed
The camera took great pictures right out of the box.  The camera feels good in the hands, with a soft rubbery skin and is shaped for a good comfortable grip (much better than my Nikon).  There was a small learning curve for the basic functions, but nothing that inhibited picture taking.

Safari drives were done in the early morning and late afternoon/evening.  Lots of good pictures would have been very difficult to take with my Nikon, due to the low lighting.  The built-in flash on the Fuji camera worked really well, with great pictures of cats at 30+ feet, in the dark.  This camera has an EXR setting, which greatly improved pictures in low light situations where the flash was not effective.  I also liked the way the camera can be set to use the flash when manually popped up, rather than automatic at its discretion.

I quickly learned that the camera has an automatic setting that swaps the lcd screen for the viewfinder just by holding your eye to the viewfinder, which is a blessing.  The zoom lens had a better range than my Nikon had with both of its lenses.  Everybody on our trip envied the close-up zoom on this camera which is stated to max out at 624mm focal length, where my Nikon maxes out at 200mm.  The fast shutter speeds compensated for most of the jiggling, and I got a good percentage of crystal clear pictures at the maximum zoom, from the bumpy Range Rover, while it was moving.  I also toyed around with the panoramic features, which produced solid, clear pictures (but I am not sure what to do with them).

I took over 2400 pictures on this trip. A lot of the bad and redundant pictures were deleted in the field, and the deleting process on this camera is easier to do with this camera than on the Nikon (two less button presses).

Only two downsides with the X-S1 Camera
Battery life was much shorter than the Nikon.  With similar use, the Nikon battery would have to be charged only once during this two week trip, where the Fuji had to be charged every night.  I was shocked when the Fuji ran out of juice after 400 or so pictures.  There was a lot of reviewing, sharing, and deleting, as well as some HD movies taken, but the battery life was less than I had hoped for.

Additionally, the price of this camera is higher compared to cameras with similar features.

Summary
I love this camera.  Everybody we traveled with loved this camera.  The pictures from our safaris are brilliant and clear, even when taken from football fields away.  I doubt the comparable Nikon would stop the jitters as well at full zoom.  The battery problem is not a deal-killer, and charging the battery daily on most trips is not a problem.  The low light pictures were all so clear.  The feel of the camera as well as the other features make this camera great.

Not being able to test the other comparable fixed lens zoom cameras, I would still buy the Fuji.  Owning a fixed lens SLR camera rather than what I have, is for me, a no-brainer.  I am now going to seriously consider buying the Fuji, and selling the Nikon.  Thank you  cousin Dana, for the opportunity to use this camera on our big Africa trip (hopefully not our last time there).
Posted by Elise Crane Derby at 11:37 AM

Great review! And I love the pics.

Thanks for sharing this post.This is nice Best Slr camera
having good image quality.According to me it is a good product having efficient output.

I have to agree with the article
The X-S1 is not perfect, it has some headaches.
But its still the best all round camera i have used
Its ergonomics also mean alot.
After this i cant really use cameras that dont feel right in the hands.
I had a Nikon D3100 DSLR which i sold because i could not be bothered changing lenses
I later got a Fuji X-A1 lens changing camera trying to convince myself that the superior image quality will win me over. But it didnt. Changing lenses is too much of a headache for me, as i like to take a range of photos with ease. All the way from super macro, to scenery to wildlife.
If i ever change the X-S1, it will have to be a similar genre of premium bridge camera

After 2 years with the Fuji X 10 and XS1, I was seduced by the declining prices of the Fuji XM1, mostly to use them as lens testers without having to swap. In the process, I packaged the XS1 in anticipation of putting it on sale, only to find out, I missed having the long reach of the lens. The XM1 takes stunningly beautiful images, and has much better low light performance as well as resolution; but there is no lens in the X mount format that can match the reach of the XS1, or it's macro capabilities. So, out of it came out of the box. Thereafter, I would pick it up just to hold it. Darn, it does feel nice in the hand. It makes you want to go out and take pictures. Well, it's a keeper.