TCM The Essentials with Drew Barrymore 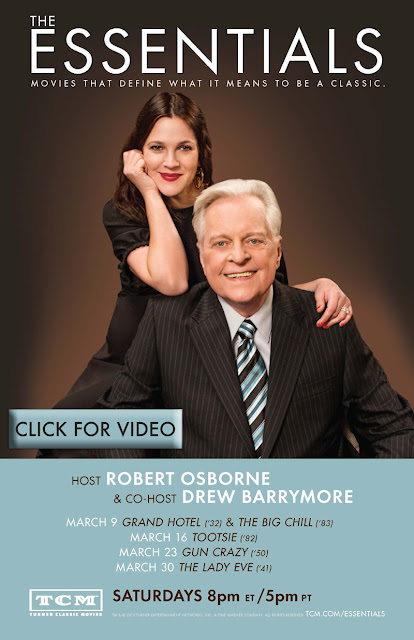 Drew Barrymore is back for a second season of The Essentials on TCM. I love this show. It's fascinating to get the background on the films from expert Robert Osborne. You can see the films featured in this season above. Click here for the entire list of The Essential films.

I'm trying not to let the fact that I saw The Big Chill on my first date, when I was 13, make me feel too old. But I have to admit it is a classic film.

Of all of these I would have to say I am most looking forward to The Lady Eve. Definitely, one of my favorite roles for both Henry Fonda and Barbara Stanwyck. Stanwyck is a con woman on a cruise ship with the uber rich Fonda, who doesn't even see her coming. They're hysterical together.

The only one I haven't seen is Gun Crazy, which looks like a seedy noir about a husband and wife crime spree. Sounds good to me.

If you get lonely while watching any of these, check in on twitter with #TCMParty. There's always a group of people live tweeting the TCM films.

Posted by Elise Crane Derby at 9:45 AM