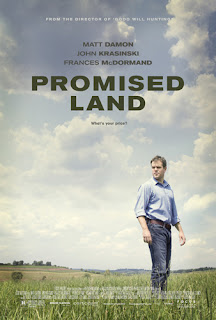 Promised Land is a new film written and starring Matt Damon and John Krasinski, and directed by Gus Van Sant. The incredible Frances McDormand also co stars, as Damon's well matched partner.  Damon and McDormand have great sparring scenes. The two are constantly ribbing one another in a friendly but still adversarial fashion.

The story is about a man who has gone through something terrible and learned all the wrong lessons. It's told against the back drop of natural gas and fracking. Even though Damon is really the bad guy he is also the protagonist, and you keep rooting for him right up to the last frame. Really all the characters are struggling with doing the right thing versus doing the easy thing or the quick fix thing.

The film is incredibly moving and I wouldn't be surprised if it gets multiple Oscar nominations for writing, acting, and direction.

Posted by Elise Crane Derby at 9:31 AM