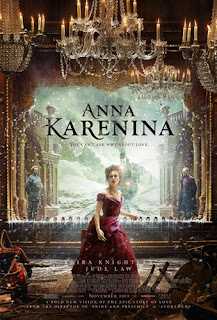 Anna Karenina opens this Friday, Novenber 16th in select cities (see below for complete schedule). It's such a unique and beautiful telling of this classic. Even if you've seen other versions many times before, this one is so different it feels like a totally different experience. Very theatrical, in the way it involves the audience.

Yesterday I was able to speak with both Anna Karenina's star, Keira Knightly and director, Joe Wright. They both mentioned the intention of drawing the audience into the product much as a theatre production would. Telling the observer this is a church, even if it's only a darken stage and having the audience so involved that they except it.

They also both talked about the importance of costume. How Anna's veil were symbolic of the caged bird, her character personifies.It is interesting to watch the progression of the veils throughout the film. The patterns are and epic tale in themselves. Also all the headed furs she wears as death imagery. When pushed to name a favorite of the gowns, Keira said she was particularly fond of a white dress she wore made of bed sheets.

Finally, we talked about the much discussed balletic qualities of the film. Dance is most noticable in the blocking, but as Joe Wright pointed out it can also be seen in the camera work. It is all to show the Russian aristocracy acting and dancing their way through life. Something Anna can no longer be apart of, once awoken to true love/true feeling. Which of course becomes her undoing.

Really a spectacular film that will translate best on a big screen, so make sure to catch it when it opens in your city.