TCM invited me on a preview of their new TCM Movie Location Tour in LA yesterday. The tour is only set to run 20 days March 14-April 14th Friday Saturday and Sunday, beginning today. The good news is the tour is free the bad news is that it is completely booked and has been since about an hour after it was announced last week.It is possible that there will be cancellations and you can check with StarLine Tours to get on a wait list. If you are really enthusiastic you could just show up at tour times and see if anyone doesn't show up. With the tickets being free it is likely some people will drop out unannounced.

If you have already got tickets or manage to get one here are a few tips. The tour is 3 hours if you think you might get thirsty only water is allowed on the bus. If you think you might get hungry only small snacks are allowed on the bus (nothing messy). There is also a wind consideration. The bus is mostly windows and many of them are open for better picture taking. If you have long hair you may want to bring a rubber band to hold it back.


The tour includes drive bys of many studios including Charlie Chaplin's (above). It is now Jim Henson Studio which is why you might be able to make out Kermit in the little tramp costume above the gate. I visited this studio several years ago and got this video of the interior of Charlie Chaplin's Studio.
We also went by these iconic Paramount gates. You'll have to take the tour to see the even more iconic single arch gate made famous in Sunset Blvd.


From Hollywood we continued to downtown LA seeing many historic theatres and the no longer in existence film noir Bunker Hill area.  We made a stop at the Bradbury Building. The building's wrought iron stair railings and elevator have been in DOA, Blade Runner, and The Artist to name a few.


If you peek out the back door of the Bradbury you get this classic bonus, Anthony Quinn dancing on the Bradbury floors. I don't know who Victor Clothing Co are, but thanks for this great mural. 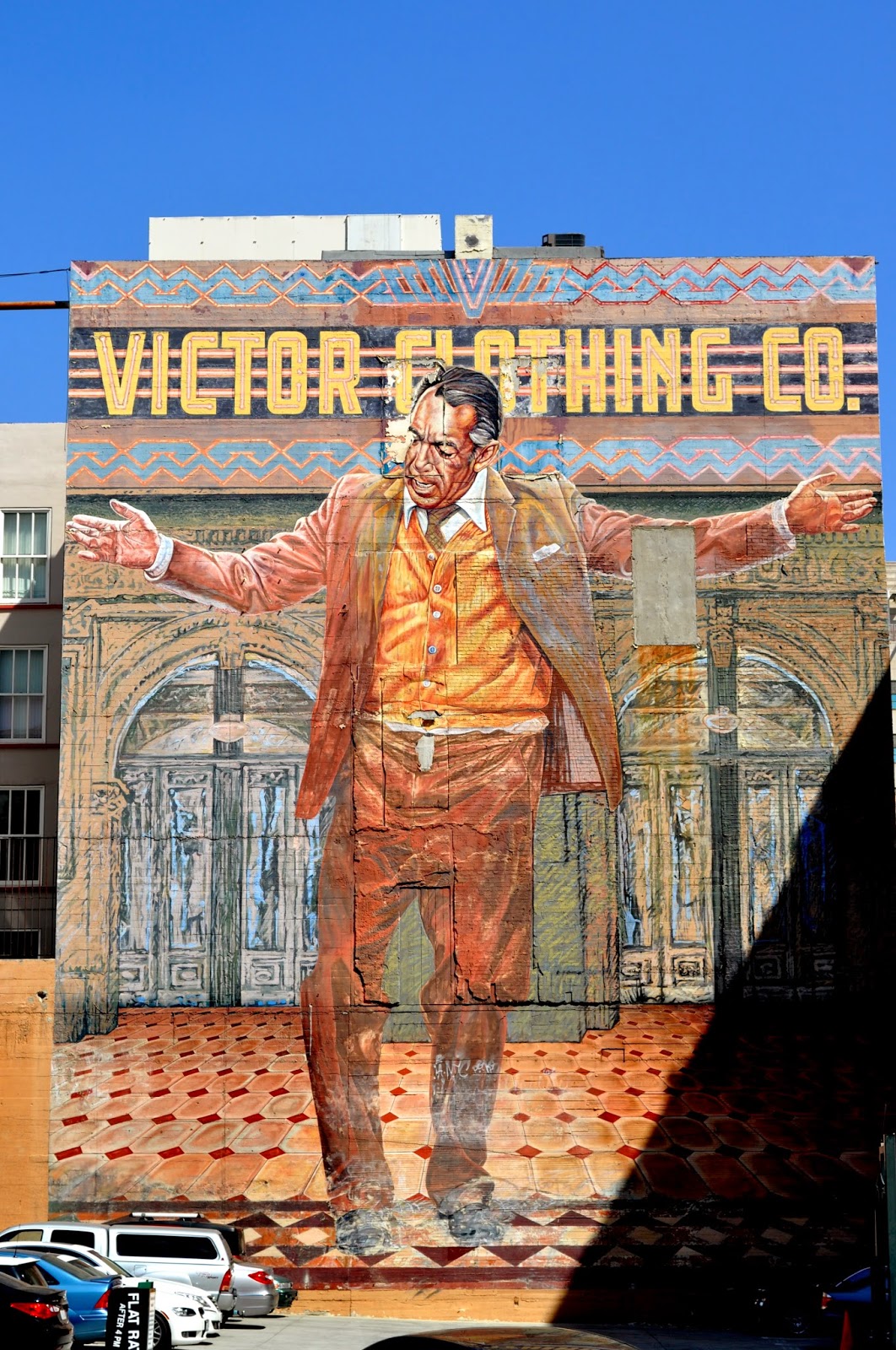 Our downtown adventure also took us to Union Station. The historic train station has been shot in from exterior to interior.You can see it in too many films to list from the early 1940's to today and probably tomorrow too.

No Hollywood tour would be complete without a view of The Hollywood sign. We got a nice long look at it driving back to Hollywood from Downtown on Sunset Blvd. Along the way we saw great shooting sites of Laurel and Hardy shorts, The Echo Park Lake that was the back drop for films from silents to today, and myriad more tidbits.

Oh yeah, and we had our TCM celebrity guest Ben Mankiewicz. Just FYI Ben will not be on the tour normally. Though he is in the video presentation, where he is his usual charming self.

Though the tour is a limited addition for now let's keep the pressure on both TCM and Starline to make this a regular tour like they've done in New York. If there is demand I'm sure they will do it.
Posted by Elise Crane Derby at 9:48 AM

CANNOT WAIT to do this!! Thanks to you - at the very least a drink is in order!!

Thanks Elise. I'm looking forward to this.

Awesome, thank you. So want to see the Bradbury.

It really is a fun excursion. Hope it becomes an LA fixture.