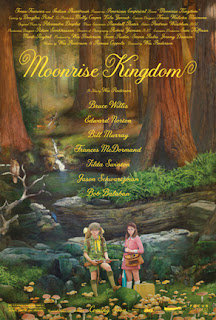 Finally got a chance to see a screening of Wes Anderson's Moonrise Kingdom last night, and loved it. It had some of Anderson's regular players, like Bill Murray and Jason Shwartzman, but also some new people like Bruce Willis, Ed Norton and (one of my personal favorites) Frances McDormand. The entire cast was phenomenal, especially the two kids in the lead roles  Jared Gilman and Kara Haytward. 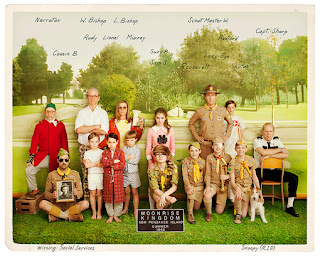 The story is about two misfit children who find one another and run away together.Reminds me in the vaguest of way of A Little Romance. It is incredibly sweet and as with all Wes Anderson films somewhat quirky. His mastery of the ridiculous had this audience laughing out loud throughout the film. There are several homages to great scenes from other films and it is fun to try to figure out what is from where. (see trailer below for one)

Some of my favorite characters were Jason Shwartzman's scouts supply sergent, who just like in every WWII movie, is able to get everything for a price. Though the scene was brief, I think he was channeling Tony Curtis from Operation Petticoat. Francis McDormand didn't get a lot to do but her bull horn wield mother was extremely real, and frankly I'm considering a bull horn of my own. Bruce Willis' cop was a sad little man but had some really gem lines like "Even smart people stick their finger in socket sometimes"

I give this film to Khaki Scout/Beige Lunatic thumbs up. If you love Wes Anderson like I do this is a sure thing. If you maybe somehow aren't that familiar with his films this is a great place to jump in and see what the waters like.

Here's the trailer if you need more convincing

Find Moonrise Kingdom at a theatre near you

Thanks for the early review of "Moonrise Kingdom." I enjoy Wes Anderson's films, but I like some more than others. So I'm looking forward to seeing where this one fits among his other films, but from your review it sounds like something to look forward to. Thanks.

Hope you enjoy it as much as I did.