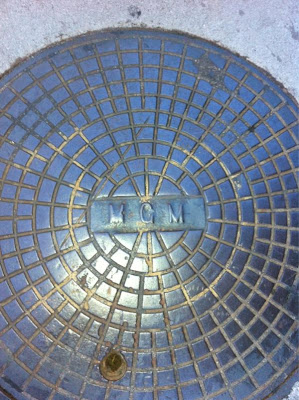 The first thing about the old MGM studio is there is nothing that says MGM there, with the exception of the manhole cover pictured above. You'll see lots of Columbia stuff and Sony but no MGM.

I was on the lot for a screening the other day and grabbed a few shots of interesting sites. I tweeted most of them live but just incase you missed those I thought I'd post them here. 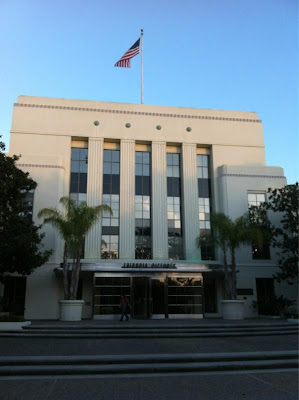 Here is the Irving Thalberg building, the boy genius who was a producer and married to Norma Shearer. The Building was named for him after he died suddenly at the age of 37. 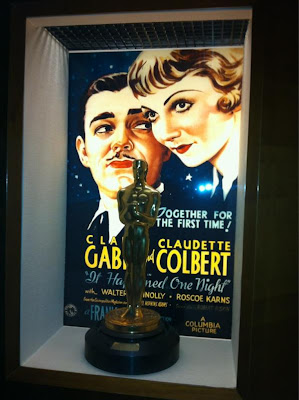 Inside the Thalberg building there are many Oscars on display with their movie posters. Here's one of my favorites, It Happened One Night.

Hope you enjoyed the tour. I really love going on these old lots. Living in LA I get to go a few times a year and it still gives me little shivers knowing I'm at MGM. Even if there is only a manhole cover to prove it.
Posted by Elise Crane Derby at 5:19 AM

I worked on the lot for a while (when Imageworks was still small) and when my mom came to visit she had tears in her eyes when we went to the stage where they shot all the Esther Williams movies. Esther is my mom's favorite movie star. It made me so happy to be able to take her there.

It really is a special place. I feel the same way about all the old studios.

I spent a lot of time on that lot growing up. My Aunt (and various other family memebrs) work for Lorimar Television which was housed there MGM.

Visited the old MGM lot...well looked on in thru the gates in 1988 - shocked to find out that MGM had moved out to across Madison Ave & Lorimar was now the land lord, but the good ol' studio was still intact if faded glory. In many ways I think Sony has degraded the lot, things like converting stages 3,4 & 5,6 (famous theater stage config) to offices. bulldozing stages 18, 19, 20 & building more...offices. Removing craft & props stores from the lot & building a parking garage They're slowly turning it from the grandest film lot in LA to a West LA business park - such a shame. MGM's Lot was an Art Deco masterpiece.