The Pirates! Opens this Friday 4/27 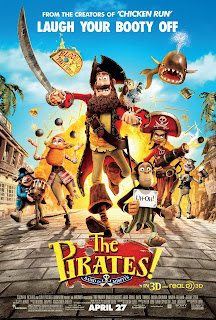 The Pirates!Band Of Misfits opens this Friday April 27th. After months of my daughter asking me if we can go see this every time she sees a poster last night I was finally able to get us into a screening. It was totally worth staying up late on a school night and the next morning drama.

The movie starts out with a band of pirates arguing about what is the best part about being pirates, which quickly devolves into a brawl and then breaks into song. Our Captain it seems is longing to win the Captain of the year prize, and since he's lost SO many years in a row he's sure this is his year. Unfortunately when he goes to fill out his application each captain who enters is more grandeous than the next. With the pirate captains dreams dashed he heads out of town with his band of misfit crew just in time to find an adventure that just might win him a prize after all.

As a parent I have to say this is a great family movie. Everyone will enjoy it, even a theatre full of cold hearted film critics were laughing. Also you could absolutely watch this several times and not catch everything. I tried to read all the street signs in the background, many of which had jokes of their own. Also the street names are hystarical. Finally the soundtrack is great too. There is one really funny song, that I can't be sure but sounds a lot like James Blunt.