The Playboy Club, Mad Men, and One Bunny 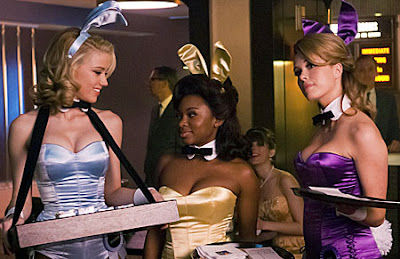 The Playboy Club premieres on NBC on September 19th. I know Gloria Steinem has asked that it be boycotted, and my first instinct IS to do whatever Gloria says, but then I know Gloria wouldn't like that kind of blind obedience. Either way I have to watch at least one to see if it is glorification or entertaining historical documentation.
Now, regarding the title of this post. Has anyone else noticed that Toni (Naturi Naughton), Lane Pryce's main bunny squeeze from Mad Men is also cast on The Playboy Club??? I'm happy to see her get more work, but this may be taking the "imitation is the sincerest form of flattery" a bit too far.
Posted by Elise Crane Derby at 8:04 AM

I think we must be hitting a bit of a sexist wave, maybe a swing of the pendulum? If Banana Republic can put out a clothing line based on Mad Men, and if Fly Girls and Playboy Club are now on the menu for broadcast television, we're going to see some fascinating backlash from the Feminists! I might purchase tickets for a ringside seat to this one... ;)

It might be great. I was talking to a female 20 something college graduate recently who had no idea who Gloria Steinem was. Didn't even recognize the name. Hopefully some of this will light a fire under that generation. Possibly even create a Gloria Steinem of their own.