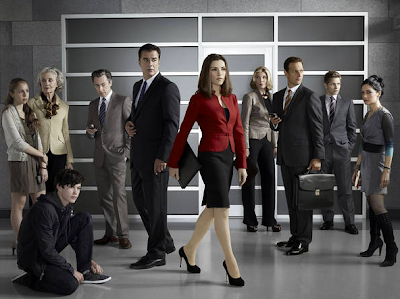 Holy Smokes!!! I just realized how much TV I have to watch Tuesday nights. By, have to, I mean I love too much to ever miss. It starts with Glee, then Flipping Out, The Good Wife, and Parenthood.
Taking the last one first Parenthood, is the show I love to hate. It makes me a little crazy but I can't miss it. Last night they had Joyce (Zosia Mamet) from Mad Men and Jesus (Kevin Alejandro) from True Blood on Parenthood. It looks like they are both reoccurring characters, so that is an extra bonus.
The Good Wife Premiered last night. I just love love this show. Alan Cumming's character is getting very meaty. I can't believe he erased Alicia's messages. He's bad and now he's in cahoots with Alicia's mother in law. Not to mention, the dreamy new partner Derrick Bond played by Michael Ealy.
Flipping Out reminds me of my old personal assistant days. Jeff Lewis makes my old employers look like angels. He is such a bundle of neurosis but he is still very likable somehow.
Glee is my new love. Sometimes I think I really only like the singing and dancing. Especially, last night with all the great Brittany Spears numbers. Who knew that Brit (Heather Morris) was such a great dancer, her numbers were really stand out. The story lines are kind of silly, but as long as I get plenty of musical fodder, I don't care.
So that's Tuesday night, fire up your DVRs and join me, you'll be glad you did.
Posted by Elise Crane Derby at 10:09 AM