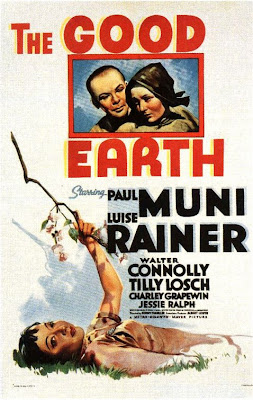 Here is one of the most once in a life time opportunities from the TCM Classic Film Festival last weekend. It's an interview that Robert Osborn did with the star of The Good Earth, Luise Rainer.
She is 100 years old and very hard of hearing, but amazingly clear headed and an absolutely terrific sport to go ahead with this interview after her hearing aid broke.
She paints herself as a strong willed women who struggled to get along in Hollywood. She did not sit in Mayer's lap as other actresses say they did. She describes Muni, her co star in The Good Earth in less than glowing terms. I can only imagine how challenging it must have been for her, and understand why her time in Hollywood was so fleeting.
I know TCM will be airing this interview in it's entirety at some point so here is just a taste from my flip video camera recording.

Here she talks about Greta Garbo and The plethora of extras for The Good Earth.