Planet 51 is being released nation wide this Friday, November 20th. It's great for the whole family. My 5 year old thought it was very funny, my husband enjoyed all the inside sci fi references, and I enjoyed interpreting it like an old 50's sci fi movie.

The movie itself takes place on an alien planet, where for some reason, they live like it's the 1950's. It might be because of information they got from a US and a USSR satellite we see briefly at the beginning of the film. They never say, so you have to decide for yourself. Anyway, when Chuck Baker (voiced by Dwayne Johnson), American astronaut lands on Planet 51, all hell breaks loose. Every one is terrified of the "alien", with the exception of Lem (voiced by Justin Long)a teenage Planet 51 resident, who tries to help Chuck get back to his ship before it takes off without him.
From this I extrapolated (I totally thought that had "strap" in it) that the film was really about how other countries like to "sample" American culture, but don't really like us all that much. I mean it's cute to Bar-B-Que and wear poodle skirts like the people on planet 51, but the real deal is so conceited, and boorish like the American astronaut. Yet, in the end aren't we all the same.
I know, I know I may be in need of a hobby. But I'm thinking how The Body Snatchers was really about communism, and Attack of the 50ft Women was about women's rights. I'm just keeping it really 50's sci fi style.
See for yourself on Friday and get back to me.

Now here are the giveaway details: 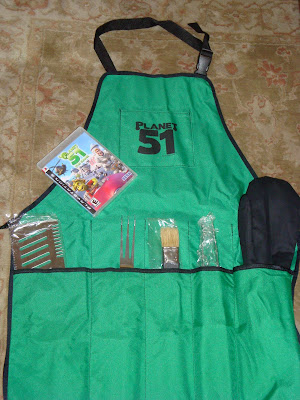 I have a Bar-B-Que set(given to me at the Junket, for which I had to get special permission to giveaway), a Playstation 3 Planet 51 game, and 5 write-on tshirts with markers(sorry I don't have a picture of those) to give away. One lucky winner will get all three and four runners up will get t-shirts. Just leave a comment on this post and I'll draw a winner on Friday. Entrants must be in the contiguous US.
Good Luck!

UPDATE: We have our winners David M. is our grand prize winner with Kim,(Kim Not Moldosky, please contact me with your street address, I couldn't find contact info for you) Kim, Raquel, and Mamma winning t-shirts and surprise buttons!!!
Congrats to all!!!
Posted by Elise Crane Derby at 12:44 PM

Sounds fun and I'm collecting apron-things these days. You had to get permission to give the swag away? interesting. I, for one, appreciate your sharing. Thanks!

Sounds like an adventure the whole family can love! Thank you :)

Me! Me! Pick me! I want to win the cool mom for the day award with my kids!!!

My guys would love the new game! I love that it would be age-appropriate.

Thanks for hosting the giveaway.

I can't wait to take the kids to this. Thanks for the contest.