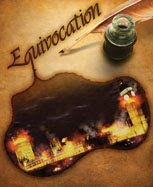 Last night, I finally saw Equivocation(see this earlier post show synopsis). And it was definitely worth the wait. I had read a less than rave review in the LA Times yesterday morning and was a bit worried that this production would not live up to my mother's telling of the Oregon production she saw. But it was great.
I had not been getting much sleep last week, due to spider nightmares my 5 year old was having every night that required about an hour of talking down, and then sharing a bed the rest of the night. It's fair to say I was pretty tired going into the theatre. But almost from the moment it started I was enthralled.
It's brilliantly acted by a small cast that jumps between various roles, sometimes right in front of you. There are several scenes where characters jump back an forth between being two different characters simply by putting on and taking off a crown or scarf, and changing accent. It was amazing to watch, very impressive, and somehow not at all hard to follow.
I definitely think if you are in the LA area you should get to this show. It really is amazing. I don't have that great a grasp of Shakespeare, really just the main plays and even those only a passing understanding, and I loved it. If you are a real Shakespeare buff I bet you'll get all kinds of things I missed. Beside the whole Shakespeare thing there's a lot of interesting conversations about torture, propaganda, and other issues that are certainly of as much interest today as then.
I really can't say enough about it, it's definitely going in my favorites file(don't look for that, it's only in my head and it's a mess in there)
It runs through December 20 so hurry up and get your ticket. Here's the link to The Geffen Playhouse.
Posted by Elise Crane Derby at 11:40 AM

i'm so glad you liked it! the acting is AMAZING, right?