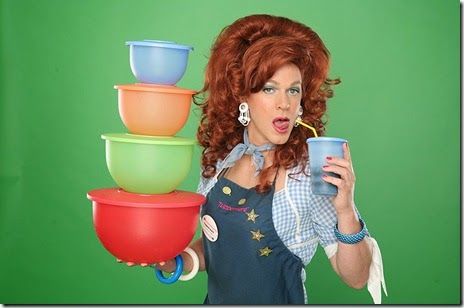 Join fast-talking Dixie Longate for a raunchy romp wrapped in a Tupperware party. Dixie rocks peak 50s fashion as a thrice divorced Alabama mother of three, including little Absorbine, who has found her power and passion through throwing the world’s best boozy Tupperware parties. The intimate size of the Geffen Playhouse's Audrey Skirball Kenis Theathre allows Dixie to interact with the audience- both to tease a few select audience members and to share with them her insights into the ambition and resilience symbolized by her product. This 2008 Drama Desk nominated show is an irreverent riot and yet does make the audience think about the communal and humanizing nature of parties as well as the significant contribution that Brownie Wise, inventor of the Tupperware party, made to the women cut adrift when the end of World War II cast them (temporarily) out of the workforce. The show was consistently hilarious with only moments between laughs. Dixie has a fantastic presence on stage and improvises flawlessly. Some of the unscripted banter with the audience were real highlights of the show. Be prepared for some snorts and spurts of laughter from her off-color humor. I’d be happy to attend another one of Dixie’s parties anytime!

You can purchase all the containment needs of your wildest fantasies after the play- no pressure though!
Posted by Elise Crane Derby at 10:43 AM

I saw it on Tuesday night and laughed the entire time. I had had a terrible day leading up to that and Dixie changed my entire day. It was great to leave happy and with my sides still hurting from laughing so hard And it was amazingly inspiring to me that even in her ribbing of some of the audience, it was always kind. She is a gracious lady I Loved Loved Loved this show.