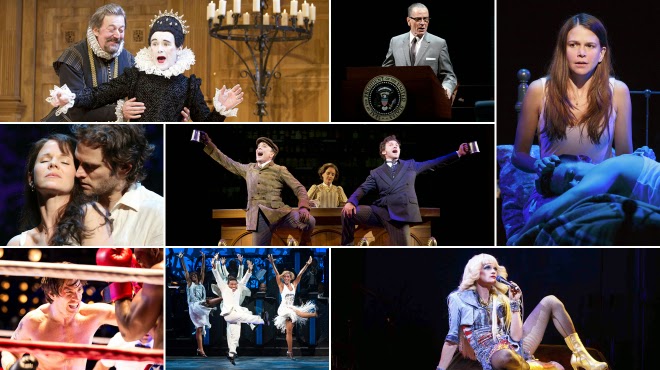 Every year when the Tony's are on TV I watch and see all the Broadway shows I hope and pray will come to Los Angeles with their Broadway casts. Someday I hope to go to New York and see a shows there but until that day I cross my fingers, rub my rabbit foot (and artificial one, cause that's just cruel), and pray to the theatre gods that I will see some of these shows in the years to come on a stage near me with their broadway casts.

Last night's Tony broadcast left me with this list,so here in no particular order.

BEAUTIFUL
A musical about the life of Carole King. I love Carole King and I love the film GRACE OF MY HEART that was loosely based on her life. I heard about this play before it opened and I was hoping it would be great and I guess it is

AFTER MIDNIGHT
A musical about the Cotton Club. This looks like a great show full of all my favorite old standards. I'm guessing it's all the club scenes in the film THE COTTON CLUB only more so. The cast doesn't hurt either, Patti LaBelle, Gladys Knight, and Fantasia.

A GENTLEMAN'S GUIDE TO LOVE AND MURDER
A distant heir to a family fortune apparently goes about clearing the intermediaries with what they discribe as, charm and a dash of murder. The number they did on the Tony's was hysterical.

HEDWIG AND THE ANGRY INCH
This is described as a rock musical about a fictional rock band with a transgender lead singer. There is a film I have never seen but have heard is also wonderful. It stars the unstoppable Neil Patrick Harris, who performed a number from the show that was brilliant.

I'm sure there are many great straight plays too, but I love the musicals. If you have any further recommendations please let me know!