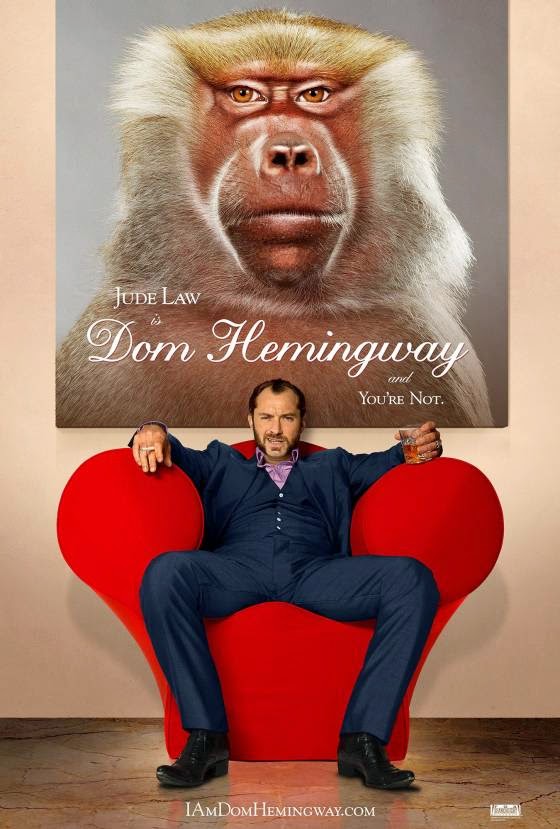 Dom Hemingway opens April 2nd. Fox Searchlight invited me to a screening last week and after a bumpy start I have to say I really enjoyed it. I say Bumpy start because the film opens with our lead character, Dom Hemingway (Jude Law), involved in a prison scene that is a bit of a jolt. It does tell you a lot about the character however, as well as set you up for the unusual journey that is this film.

Dom Hemingway, is recently released from prison after 12 years and he is attempting to assimilate to being on the outside. His progress is definitely up and down, but he does make some progress. Mixed in with a lot of extremely violent scenes is an emotional tale of the family he lost when he made the decision to go to prison rather than rat out his crime boss.

Interestingly the film seems to float in time. Dom and his buddy played by Richard E. Grant are costumed like they just fell out of a 1970's Michael Caine film. In fact Laws performance is reminiscent of  Michael Caine in the 1971 Get Carter but perhaps on steroids. The soundtrack bounces from 1980s to present day but over all sets a very 80s sound with the likes of Motorhead, Big Country and The Pixies. But the sets are all modern day.

From beginning to end I was completely engaged and even shed a tear in the final scenes, which is not what I would have expected from the opening scene. The film definitely runs gamut of emotions with a few laughs too. I think it is a great movie, destined to be a cult classic if not just a straight up classic! Don't miss it.