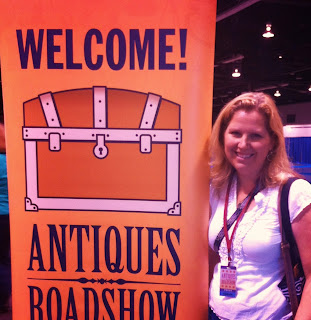 Last June I was invited to attend the Anaheim Antiques Roadshow for season 18, that's right THE PBS Antique Roadshow. I love me some Roadshow and having the opportunity to be at one live and in person is the most fun! Every time their anywhere near LA I do my best to get in. So far I'm Two for Two.
I was really surprised to learn that the appraisers are not compensated in any way for their appearance on the Roadshow. They even pay for their own travel and hotel. Even the Keno brothers aren't paid. I assume it is a great promotion for their businesses. Sadly none of my treasures were worth much, but it's always fun hearing from the experts about them.


The day I was there the Keno brother thought they might have found an interesting picture. They were rushing around to all the appraisers for different experts, to verify authenticity. I never did find out how it came out, so I'll be watching to see what became of the little paint of a man in a workshop.

For the season premiere, the 11-time Emmy® nominated series traveled to Boise, Idaho, yielding one of the highest-valued finds of the season: an inherited oil painting of an Italian landscape by important Hudson River artist Sanford Robinson Gifford, which was appraised for $300,000 and had previously languished in the owner's basement.

There are some great tid bits for all the classic film fans too. Check out the Antiques Roadshow Season 18 trailer for all the scoop.