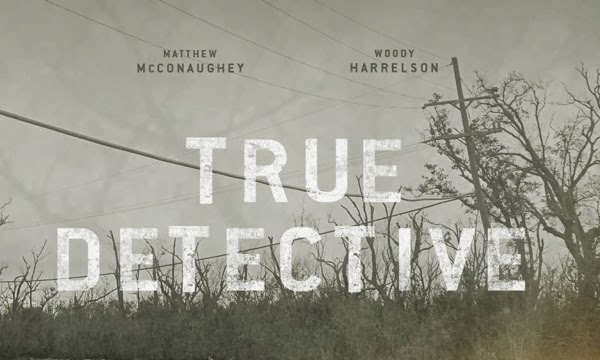 HBO has a new series premiering January 12th, starring Mathew McConaughey and Woody Harrelson, TRUE DETECTIVES. When I first heard about it I pictured a buddy cop show with lots of witty repartee. Boy, was I wrong. This is a really dark story of two police detectives investigating a serial killer. McConnaughey's character is an exceptional cop with a painful history. While Harrelson character is just a mess of contradictions. The tempo of the show is extremely moody and somber. After watching the first few episodes I definitely had a feeling that something was about to jump out at me any minute.

The story is told from two different times, with the action jumping back and forth between them. First there is the time where the two detectives are investigating the killer. Then there is a time in the future when two other police officers are questioning Harrelson and McConaugheys characters about the investigation. I'm not a huge fan of this type of story telling, as it can be a bit jarring, but it is done well here and develops the story.

I'm definitely going to watch this one. While the pacing is slow, it does build an insane amount of anxiety about the characters and the case. I would not recommend watching this one alone at night. I think it goes without saying the cast is fantastic. Both these actors and the supporting cast do a stellar job of completely creeping you out.