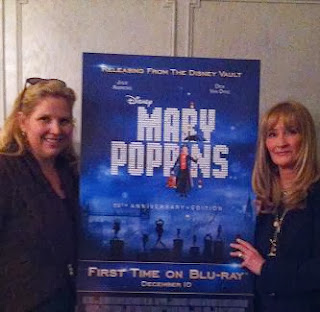 I was invited to celebrate the Blu-ray release of the 50th anniversary edition of Mary Poppins last week. A small group of us were invited to have tea with none other than Jane Banks herself, Karen Dotrice. She had so many great stories to share about the making of the film.

While she didn't recall ever having met the writer P.L. Travers, whom will soon be amazingly portray by Emma Thompson, in Saving Mr. Banks (theatrical release Dec. 20). She thought perhaps after seeing the new film that they kept her away as she was "challanging" to deal with. She did have many warm memories of Walt Disney and his kindness to her and her family. One particularly sweet story she told us was of being taken somewhere in Walt's private plane. She was uneasy about flying and he had the entire plane made out like a candy story for her and her sisters. 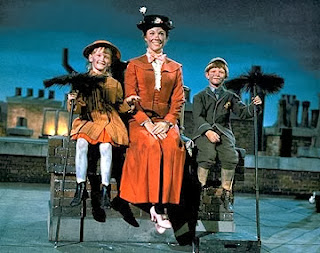 On the other hand, she regretted not having any nice tales to tell about her costar and often on screen brother Mathew Garber. Seems he was a bit of a handful. But, she kept those stories to herself.

She did share that she had prepared all her songs in England with a coach before coming to Los Angeles to film the movie. The coach had instructed her to sing them all in an operetta style which, to put it nicely, surprised everyone. Julie Andrews took her aside and retaught her all the songs. Can you imagine getting singing lessons from Julie Andrews. It must have been AMAZING! Then Julie also stood by her while she did her recordings with the live orchestra.

Finally, she gushed about Dick Van Dyke. How lovely he was. I dared asked about the famously terrible accent and she said that he was such a great performer you forgot in the moment that he was suppose to be putting on an accent. Then she side stepped into what a fun person he was to be around then and now (they're neighbors today).

We only had about an hour and a half with Karen, but I wish we could have sat there all day. She was really funny in her story telling. I got the feeling she could  have gone on and on. I wish she had.

The Blu-ray releases December 10th, just in time for all that pesky Christmas shopping!
Posted by Elise Crane Derby at 1:29 PM