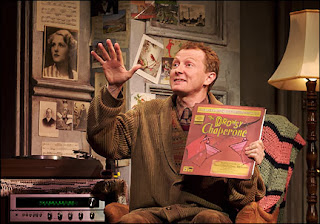 I first saw The Drowsy Chaperone when it made it's US premiere at The Ahmanson Theatre in Los Angeles way back in 2005. With the original cast and Bob Martin in the role of Man In The Chair, he also co wrote the play with Don McKellar. The music is by Lisa Lambert and Greg Morrison. It had been playing at theatres in Canada since 1998 but some how took almost 10 years to come to the United States.

THE DROWSY CHAPERONE begins with a man in a chair listening to his favorite cast album. Slowly the stage around him becomes the Broadway stage of this 1928 musical. Throughout the play the man in the chair narrates the mad cap goings on. 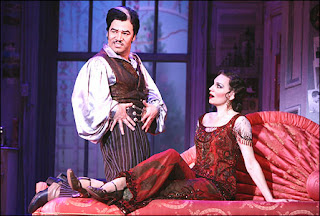 Geoffrey Rush was in the original Australian cast in 2010, I feel for them having to wait an additional 5 years after us to get this play, as the Man In The Chair. He is now working on a film and I have heard some noise about Hugh Jackman signing on to play the Latin Lover character in the play within the play, pictured above from another production. I can totally see Jackman doing this character.

This is all the news I have at the moment but I'll keep updating as I get more info. In the mean time go see, the amazing film, THE BOOK THIEF. Maybe if Geoffrey gets lots of money from it we'll see THE DROWSY CHAPERONE that much quicker.

Based on various interviews it sounds like it will be going into production in early 2014. If you're not convinced here's a commercial for the New York  production.

I wanted to see The Drowsy Chaperone when it was at the Ahmanson, but never made it. I hope the movie is good!