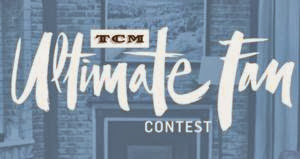 TCM is running an Ultimate Fan Contest. Winners will get the opportunity to introduce a film with Robert Osbourne on TCM and introduce a film at TCM Classic Film Festival, including air and hotel to Hollywood for the festival April 10-13.

To enter TCM Ultimate Fan Contest all you have to do it send in a video introducing your favorite film by October 31st. The contest began October 1st and TCM is already running entries on their web site. Check out all the TCM Ultimate Fan video entries for ideas of what works and doesn't. TCM also has some sample videos, that seem pretty theatrical, so you may want to consider going that way too.

I highly recommend reading the blog Cinematically Insane's post on the contest. He has great tips on making the video.

Thanks for the shout out, Elise!