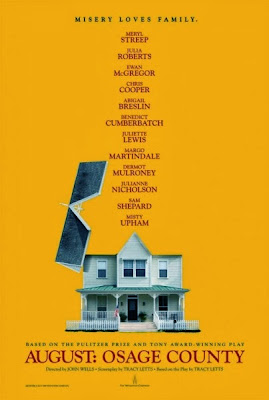 I've been dying to see the film version of August: Osage County, for what feels like forever. It's starting to play at film festivals and is suppose to release late December 25.  That should make for some interesting post holiday family movie theatre trips.

Here is The Weinstein Company's synopsis: AUGUST: OSAGE COUNTY tells the dark, hilarious and deeply touching story of the strong-willed women of the Weston family, whose lives have diverged until a family crisis brings them back to the Midwest house they grew up in, and to the dysfunctional woman who raised them. Letts’ play made its Broadway debut in December 2007 after premiering at Chicago’s legendary Steppenwolf Theatre earlier that year. It continued with a successful international run.

The play balanced some pretty ugly family exchanges with an equal amount of humor and it was fantastic. I'm hoping they managed to pull the same off with the film. The cast includes Meryl Streep, Sam Shepard, Julia Roberts, Benedict Cumberbatch, Chris Cooper, Ewan McGregor, and Abigail Breslin. The list of amazing actors goes on, but you get the idea, this is a stellar cast. I, for one, can't wait to see their performances.

Until then here is a trailer.