The Paradise on PBS 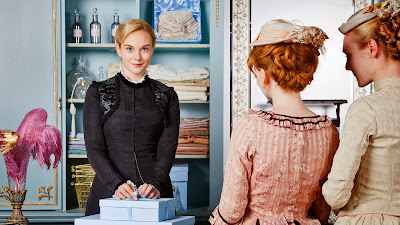 The Paradise premiered on PBS' Masterpiece Theatre last night. I was a bit lukewarm on this series as I had not particularly loved Selfridge (also set in a department store in Victorian England), but I was happily surprised.

You can view the first episode of The Paradise on PBS here online.

A bright-eyed country girl, Denise Lovett, finds more than just shop-girl work when she brings her clever ideas and ambition to Britain's glamorous first department store, The Paradise. Denise is plunged into power struggles, intrigues and romance as she catches the attention of the store's dashing and enigmatic owner, John Moray. Entangled with his powerful financial backer's entitled daughter, Moray harbors a dark secret as well as debts that threaten to ruin his hard-won empire. The Paradise, embodying the progress and the pain of a new age of commerce, is the way of the future. But will that future belong to those who usher it in…and can they have a future together?

Based on Émile Zola’s beloved classic novel, Au Bonheur des Dames, The Paradise revolves around the lives of the people who live and work in the store, each bound in their own way by the power of the world they live in, and the pasts that follow them there. A love story, mystery, and social comedy all in one, the lavish costume drama stars Joanna Vanderham (What Maisie Knew) as Denise and Emun Elliott (Game of Thrones) as Moray, alongside Sarah Lancashire (Upstairs Downstairs), Elaine Cassidy (A Room with a View) and Patrick Malahide (Game of Thrones).
Posted by Elise Crane Derby at 10:59 AM