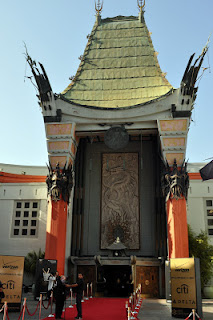 TCL (Grauman's) Chinese Theatre made an announcement today that it will reopen September 15th with a week long engagement of Wizard of Oz in 3D and IMAX. Sigh

When the announcement was made that The Chinese would close this summer for renovations and to "upgrade" to IMAX, I was among the group of people extremely concerned about it's historic status. We've been assured by both TCL and the LA Historic Theatre Foundation, that all the remaining historical features of The Chinese were being protected. Which seems to be the case.

I have to acknowledge that this IMAX renovation may be the thing that ultimately saves The Chinese. Anyone who lives in LA and loves old theatres knows how few are still operating as theatres; churches, jewelry stores and even storage for electronic stores yes, but not theatres. While The Chinese was not in immediate danger, as the theatrical release film industry is in decline, it is important that it remains current with trends.

It is sad to see the change but it is worth it, if it allows the theatre to continue for future generations. Change is hard, period. This new incarnation will bring in new audiences, which in turn will fund the theatre going forward. So like the title says The Chinese Theatre is dead, long live the Chinese Theatre.

UPDATE: Once open The Chinese Theatre will only show IMAX films, though it will maintain the ability to show other formats for premieres and film festivals. Which means TCM Classic Film Festival will still be able to hold it's film fest there. Hooray!

I agree. I've never seen the Wizard in IMAX. Come to think of it, I've never viewed it in an actual theater. Maybe we should make a date to inaugurate the new Chinese...

Absolutely. Tickets are $19 but I think it will be worth it.