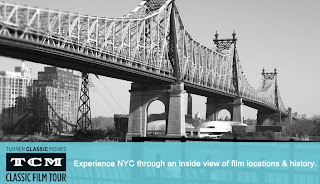 I just got this press release from TCM. Wish I could be in NY for it.


The network has partnered with On Location Tours, one of the world's largest TV and movie tour companies, to create the "TCM Classic Film Tour" in New York City. Featuring stops at some of the most famous movie locations throughout the city, this sightseeing bus tour is one of several initiatives TCM is launching as it prepares to celebrate its 20th anniversary in April 2014.

The "TCM Classic Film Tour" features an experienced and knowledgeable tour guide, extensive trivia about each location and a special video introduction by TCM host Robert Osborne, a longtime resident of New York. "As a kid growing up in a small town in Washington State," Osborne says in his introduction, "my only exposure to New York City was through the movies. The town with its towering skyscrapers, fascinating people and teeming energy absolutely captivated me. Seeing New York in the movies is what made me want to live in Manhattan one day. I eventually got my wish, and the city has never disappointed me.”

In addition to seeing the real locations, visitors will get to see clips of the sites from the movies. "It's a great way to see how much – and how little – the city has changed over the years," Osborne says, "and how the history of New York and the history of the movies are so intertwined."