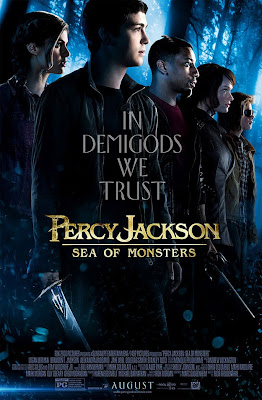 My family was invited to a screening of Percy Jackson last week and we loved it. We had really enjoyed the first one when it came out and rewatched it to get a refresher before we saw the new one. These films are a great introduction for kids to Greek mythology. Even if the stories are a bit altered the children get an idea of names, gods powers and fables. .

Both my husband and I thought the special effects and story were great. You know when a movie feels like it ran a half hour you enjoyed it. Stanley Tucci has a small part in the film and I just love him. He is always witty and endearing. If I had any complaint about the movie it would be, there could have been more Stanley.

We brought our 9 year old daughter and almost 12 year old nephew. Both kids thought it was great, even better than the first one. They loved how scary it was. Both of them thought the creatures in the film were "really cool". They were really excited about the fact that there are books that have yet to be made into films and want to read them.

My only warning about this film is that it is a bit scary. There was a little boy about 6 years old who left. My daughter probably would have been ok at age 6, but she has a pretty high tolerance, so use your judgentment. If your child gets spooked this may not be the one for them.