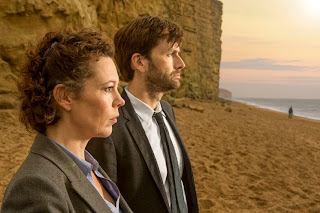 Starring David Tennant and Olivia Colman as detectives investigating the murder of a boy. Broadchurch is a seaside vacation town, where everyone keeps saying nothing like "this" ever happens. The more the two detectives dig the more they find all sorts of unsavory things are happening in Broadchurch and right under their noses.

There are definitely shades of Twin Peaks and The Killing in this show. Unlike, those American shows you will find out who the killer is in the final episode. The series runs 8 episodes on Wednesday nights on BBC America.

Another season is expected to start shooting in the near future.