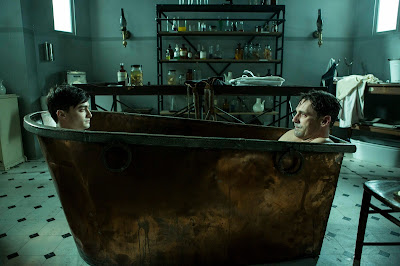 Ovation describes the show " Renowned Russian writer and playwright Mikhail Bulgakov’s book A Young Doctor’s Notebook was adapted into a television series by writers Mark Chappell, Shaun Pye and Alan Connor (The Increasingly Poor Decisions of Todd Margaret). It is a darkly humorous account of the turbulent experiences of a newly graduated young doctor (Daniel Radcliffe), artfully told through the eyes of his older, opiate-addicted self (Jon Hamm), who narrates the action from his own notebooks. The young doctor lands a post at a small hospital in a remote village during the Russian Revolution.  Dealing with superstitious and poorly educated patients creates for the doctor a brutal, panic-inducing introduction to his medical practice, causing the young doctor to struggle with doubts about his own competence."

The series was previously released in England and was critically acclaimed and  was the highest rated program for that network (Sky Art).

I've been dying to see this ever since I heard it mentioned on The Graham Norton Show earlier this year. Sadly my cable provider doesn't carry Ovation. Check to see if you get Ovation here. I put in a request with Time Warner here in LA to add it to their listings. We have a few months so if you're not getting Ovation get your requests in soon.
Posted by Elise Crane Derby at 11:03 AM