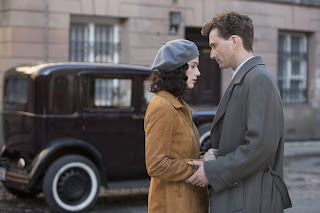 Spies of Warsaw is on BBC America tonight, starring David Tennant (Doctor Who 10). Based on the book by Alan Furst. Spies is set in Warsaw in 1937, in the years building up to WWII. Full of espionage and covert missions, and of course a love story to round things out.

If you miss Tennant as much as I do, you'll be watching this tonight. It looks like a fun action packed spy movie. At last winters TCA (TV Critics Press Panels) Tennant and the writers promised this would be a very sexy show. There was lots of talk about sex on trains and Tennan'ts characters string of lovers. So there is that.

On a side note: I got a chance to speak with David Tennant and asked him if he saw his Doctor Who returning, with his alternate world incarnation still in existence. He wouldn't rule it out. Saying that you never know and that with Billie Piper looking younger every day she could definitely do it.

Spies Of Warsaw will air tonight, April 3 and April 10th. Check your local listings for times.

I'll be watching tonight and of course tweeting along. #SpiesOfWarsaw