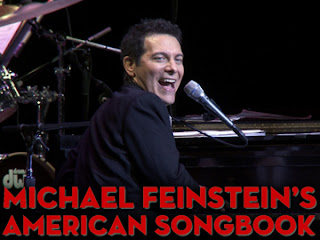 Michael Feinstein's Season 3 American Songbook starts tonight on PBS. If you didn't see the first 2 seasons you're missing some great stuff, so be sure to catch this one. This season includes lost footage of Broadway performances by huge stars doing unforgettable numbers, old radio show performances, and interviews with everyone.

All that and Michael Feinstein himself, who I just adore!


Here's the complete run down on each episode:

“Show Tunes” – Friday, April 5, 2013 at 9 pm. Stars in the Broadway universe don’t shine much brighter than Stephen Sondheim, Angela Lansbury and Christine Ebersole, all of whom appear in this episode about great American musicals. Sondheim reveals the composers he most admires and shows Feinstein some rare home movie footage of the original Broadway production of the classic Follies. Tony Award-winner Ebersole gives a tour de force performance of some of the greatest show tunes of all time, and Lansbury reflects on her Broadway career, from Mame to Sweeney Todd and Gypsy. (Feinstein has a surprise for Angela.) Feinstein discusses his personal relationship with Ira Gershwin (also the topic of his recent book) and performs the classic “Lullaby of Broadway,” “Let Me Entertain You” and “No One Is Alone.”

“Let’s Dance” – Friday, April 5, 2013 at 10 pm. Fred Astaire is Michael Feinstein’s favorite singer — but he also was the favorite singer of Irving Berlin, Cole Porter and George and Ira Gershwin. Why was this dancer, first-and-foremost, so beloved by America’s great composers? With that question, Feinstein launches into an exploration of the marriage between music and choreography, unearthing rare home movies of Astaire rehearsing on set, and remarkable memorabilia from that other screen-dance icon, Gene Kelly. Kelly stuns in never-before-seen footage of his Broadway debut in the original Pal Joey, as does the iconic Cyd Charisse, seen in her first television performance. Liza Minnelli, who knew Kelly and Astaire, discusses their unique styles and techniques. She also is seen in vintage television clips dancing with Kelly and performing some memorably steamy choreography. Feinstein indulges his inner Astaire with private dance lessons, learning differences between the fox trot and the turkey trot, among others. Finally he explores the endless popularity of ballroom dance and performs the classics “Change Partners,” “Singin’ in the Rain,” “Shall We Dance” and “Let’s Face the Music and Dance.”

“On the Air” – Friday, April 12 at 10 pm – Today, “American Idol” is the country’s biggest music star-maker, but decades ago, the Golden Age of Radio fulfilled the idol-making role in the U.S. Feinstein traces the phenomenon with archival clips of Bing Crosby, Cab Calloway, Kate Smith and many others. He visits with TV and stage star Rose Marie (best known as “Sally Rogers” on “The Dick Van Dyke Show”) and learns about her career as a highly paid child radio star named “Baby” Rose Marie. On his own syndicated public radio program, Feinstein showcases the virtuoso talents of classical superstars, including violinist Joshua Bell and pianist Jeremy Denk, who perform together and discuss intersections of classical and popular music. This episode includes visits to collectors of vintage radios and radio programs. Finally, he discovers a lost radio program that featured Rosemary Clooney, and recalls his own memorable duet with her.
Posted by Elise Crane Derby at 11:26 AM