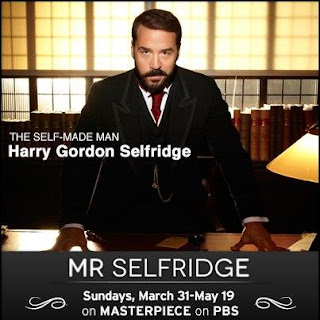 PBS is premiering it's new series Mr Selfridge tonight. If you've spent anytime in England you're probably familiar with the department store. This is the story of it's creator. Starring Jeremy Piven as Selfridge himself.

The Selfridge character doesn't come off that likeable in the previews, but I think he might be the kind of character you love to hate. A womenizing, cock sure, con man who makes it big, at least for a little while...

All that and the story takes place in the early 20th century, with all the spiffy costumes and sets. See video

For all you twitter people you can tweet along with the cast, PBS, and MASTERPIECE during the two-hour premiere. From 9-11pm Eastern time actor Tom Goodman-Hill (Mr. Grove in Mr. Selfridge) will be tweeting and on the West Coast, star Jeremy Piven will join the conversation 9-11pm Pacific time!