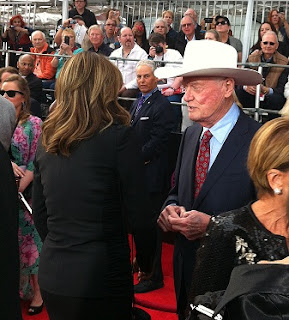 So sad to hear Larry Hagman died today. I had the opportunity to talk with him and his original Dallas co stars at last years TCM Classic Film Fest. He seemed genuinely excited to revisit his character JR from Dallas on the revival of the show on TNT, which premiered last summer. They are, now, in the process of filming the second season so I can only hope he was enjoying himself right up till the end.

I've included the pictures I snapped that day last April. The top image is Larry with the back of costar Linda Grey (Sue Ellen). Below Larry and Patrick Duffy (Bobby). 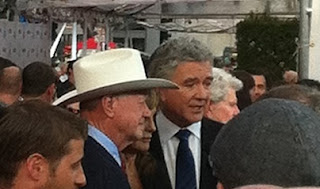 And finally here is some very rough video of me interviewing Josh Henderson who plays JR's son John Ross saying some nice things about Hagman's portrayal of JR.