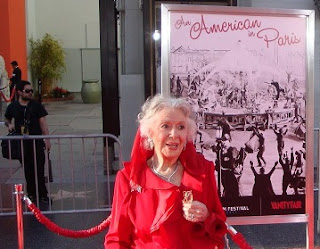 I'm so sad to hear Ann Rutherford passed away yesterday. I was worried when Ann Rutherford and Anne Jeffery didn't attend the TCM Film Festival this past spring, that one of them may be ill. You can see her picture above at the 2011 TCM film fest opening night screening of An American in Paris.

She was always very sweet to everyone on the red carpet and still quite beautiful in ruffled pant suits, which she and Jeffery's had to match in at least two different colors, to my knowledge.

Rutherford came to fame in the Andy Hardy movies and of course in Gone With Wind as Scarlette's younger sister. If you want to see some of her great film tune into TCM  Tuesday July 3. See list of films and times below.