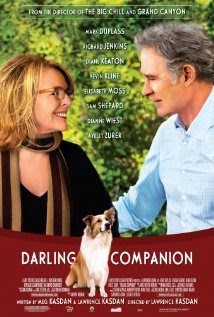 Lawrence Kasdan's Darling Companion is Opening April 20th. I got to see it a few weeks ago and it is great. First I must say I have a warm place in my heart for Kasdan. My first date was to see The Big Chill. The boy was an octopus and I had varying sucess at watching the film while fending him off, but all the same I don't hold it against Lawrence Kasdan and really do love his films.

Alright back to Darling Companion, this film stars Kevin Kline (Who must be one of Kasdan's favorite actors, he's been in so many of his films) and Diane Keaton as an empty nest couple. At the start of the film Keaton finds a dog, which reminded me of Mary Macdonald finding the baby at the beginning of another Kasdan film, Grand Canyon.

In due time the family has settled in with the dog and when they all go to Colorado Kline looses him. Which is the main meat of the film, everyone looking for the dog. Relationships are built and destroyed and then rebuilt again. It really is an entertaining film.

There is a great supporting cast including Dianne Weist, Richard Jenkins, and Elizabeth Moss, who plays Peggy on Mad Men. She plays Kline and Keaton's daughter. Whose marriage to the dogs vet brings them all to Colorado.

I hope you will all go out to the theatre and see this. I know I am guilty of thinking I don't need to see these quieter films on the big screen and can wait for the DVD release, but if we don't go to the theatre for them they will stop making them. So find yourself a ridiculously handsy 14 year old boy and see this Kasdan film (14 year old boy optional).
Posted by Elise Crane Derby at 10:00 AM