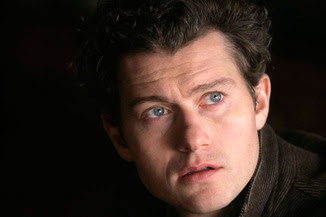 Rubicon premieres on AMC this Sunday, August 1st, from 8pm-10pm. AMC has given me the first few episodes of this show, and I'm dying for the rest of the season. The series has a very muted palate and subdued energy. I think I've heard at least three people who watched the preview last week say it reminds them of Three Days of The Condor, which is exactly what came to my mind too.
The show stars James Badge Dale, who you may remember from The Pacific, he played Peaches/Robert Leckie. I will admit to a crush on him. Here he plays Will Travers a widower who is a government analyst, trying to get to the bottom of what appears to be a conspiracy.
There is definitely a note of X files in this show. We have a main theme of a large conspiracy, with smaller issues resolved in each episode. The cast as a whole is very strong and the writing is really riveting.
Hopefully, the rest of the season will be just as absorbing.
Posted by Elise Crane Derby at 12:30 PM

Oooh, I thought I missed this premiere! Glad to know I'm not behind already. Thanks!

This sounds really interesting. I love three days of the condor! So, what's the Rubicon he's crossed? Is he on the run as he's exposed himself as a whistle-blower?
A