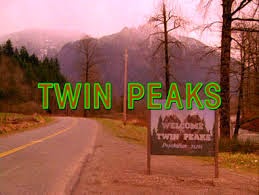 The internet is all a"twitter" about the just announced third season of Twin Peaks coming to Showtime in 2016. It will be a limited series with just nine episodes.The scripts will all be written by David Lynch and Mark Frost and all the episodes will be directed by Lynch. WOO HOO!

While few details are publicly known I think Kyle Maclachlan's tweet makes it pretty clear he will be involved.


If, like me, you were a huge fan of the series when it originally aired but haven't seen it since, not to worry Showtime says they'll be reairing the original two seasons before the premiere of these new nine episodes.

In case you doubt my original fan status I'm including pictures of me and a friend outside of Seattle visiting some of the exteriors of the show. These were taken a few years after the show was, sadly, cancelled.

Sorry for the quality. These are from a time before digital cameras!

Finally, for the holidays, here is Twin Peaks' The 12 Days of Christmas. There were at least 2 Christmas' where this would actually be played (relentlessly) on all alternative radio stations.