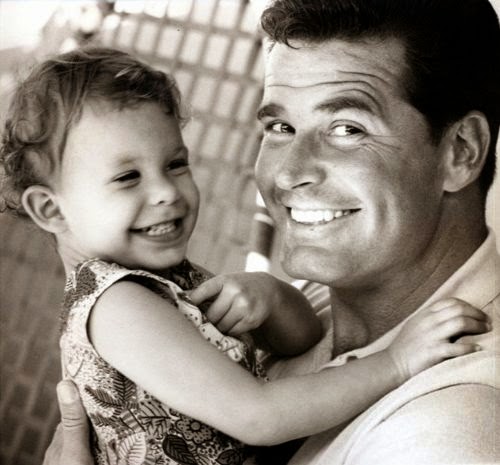 TCM will be airing a marathon of James Garner films, tomorrow, Monday July 28. He was such a great actor and I know I was one of many really sad to hear of his passing last week. For years I had been suggesting he be invited to the TCM Film Festival and each year he didn't show. I tried to believe this was through some negligence on TCM's part but deep down I knew he probably wasn't healthy enough to come.

Even though I never got to meet the man I have seen enough of him in TV, film and interviews to know he was pretty swell. Just look at the picture of him and his daughter above. That's a good guy! I hope he's somewhere fun now with race cars and all the reefer he can handle.

Here's the line up for TCM tomorrow, the times are all eastern. I've put * next to three of my favorites. Further, if this just isn't enough Garner for you, and who could ever get enough, you can stream The Rockford Files on Netflix!

So sad that he's gone. I listened to an interview with him the other day and he said the Americanization of Emily was his favorite film, with his favorite co-star, and was the character most like himself. RIP.

I think he liked Doris Day quite a bit too. I've heard he said as much about her when he made The Thrill Of It All With her.