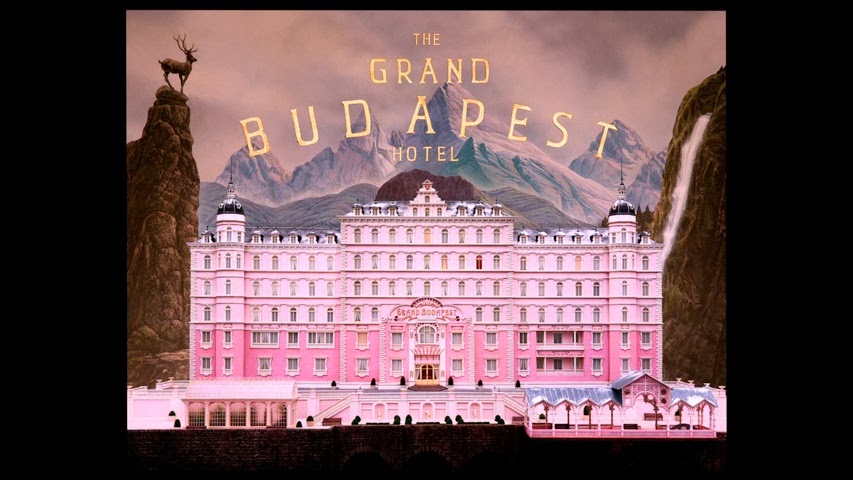 Wes Anderson's new film The Grand Budapest Hotel opens this Friday March 7th. If you love Anderson's films, like I do, you won't be disappointed here. It is all the witty, quirky antics of an all star cast you would expect. I can't be certain, because of all the amazing wigs, mustaches and makeup, but I think Wes managed to get the vast majority of all of his previous cast family in this. There are lots of small roles played by the likes of Bill Murray, Owen Wilson, Tilda Swinton, and the list goes on and on.

The film itself tells the story of a luxury hotel Concierge (Ralph Fiennes) and his favorite lobby boy (Tony Revolori). You would think these two wouldn't get up to much but in Anderson's ridiculously stylized world they run amok. The Concierge, Gustave, has affairs with his elderly female guests and when one of them dies and leaves him something priceless in her will her family isn't happy and the chase begins. His faithful lobby boy, Zero, is there to lend a hand in any way necessary. The entire film has a caper quality to it complete with chase scenes, escapes, and clandestine confessions in churches.

It really is a beautiful film to look at and as always Anderson's screenplay is perfectly farcicle. It reminds me in someways of comedy films of the era it is set in, between the world wars in what I believe is eastern Europe. The characters, set and costumes definitely have that look to them. Certainly precode based on the language.

If you don't believe me just watch this trailer...