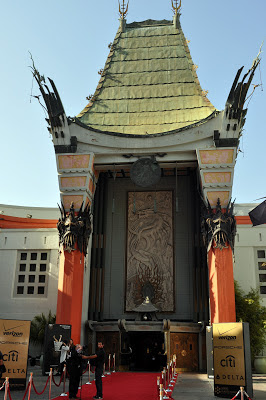 I know a lot of visitors will be disappointed to find out Gauman's, now TCL, Chinese Theatre is closed this summer for renovations and installation of IMAX. But all is not lost, you can still tour the interior. Tours will vary based on the stage of construction. The day I went the auditorium was closed but there was a lot to see and learn even for a native Angeleno, like myself. 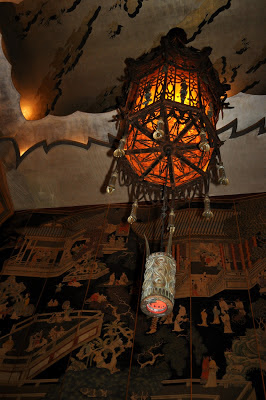 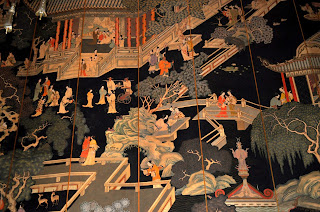 The first thing that surprised me was that the smaller light hanging from these light fixtures was originally a incense burner and in the early days of the theatre was used for that purpose. Can you imagine walking in to a theatre filled with the scent of incense. Grauman was really about the full sensory experience. The painted screens, on the walls, were done by actor Keye Luke known for his roles in everything from Charlie Chan movies to episodes of MASH. 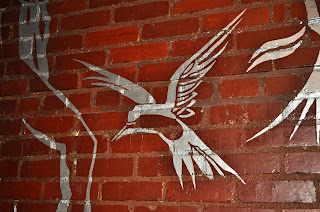 Keye Luke isn't the only celebrity artist who contributed to the Chinese. There is a large mural in silver on the brick wall wings of the theatre painted by band leader Xavier Cugat. This is just a close up of one small part of it. 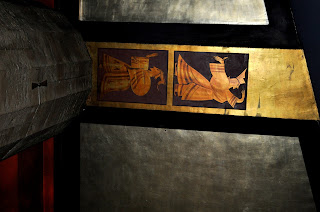 This is an almost entirely hidden painting on the ceiling on both side of the theatre near the restrooms in the wings. There is also a round portal design near it that can only be seen with the help of a flashlight. My camera could not be convinced that it was there and wouldn't take a picture. Which was a little spooky..... 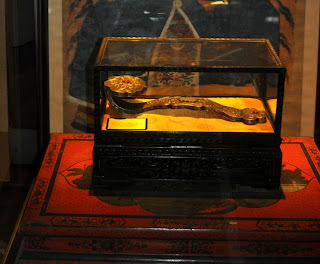 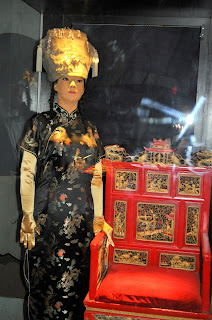 I had always assumed these decorations were just props, but they're not. Grauman brought these artifacts (septer and chair) over from China. The mannequin is a good luck charm for movies that film in the Chinese. cast and crew rub her shoulder for good luck, so much so that the dress has been replaced multiple times. The headdress is orginal. 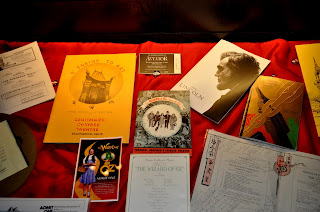 I love this display of film programs. They have great ones from recent premieres, like Lincoln. There are also ones from the early days including this Gold Diggers of 1933 program shaped like the coins that figure largely in Ginger Roger's, We're In The Money number. Good thing they had that under lock and key or I'd have been beyond tempted to thumb through it, smell it, and generally drool all over it. 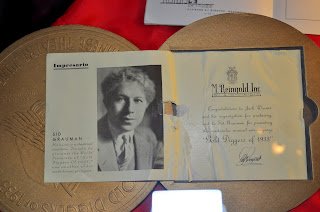 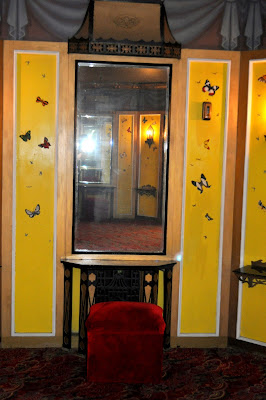 Even the bathroom is famous at Grauman's. The beautiful ladies sitting room is all original from the butterflies on the walls to the stools. you can bet just about every female actress since 1927 has been in this room, which gives me a little rush of goose bumps everytime I think about it.

The men's room on the other hand is nothing special. I did ask to see it though, just because I've always wondered. It also has a smaller sitting room. Nothing in it is original except two paintings, which are nice but not that exciting. 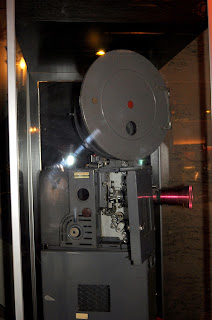 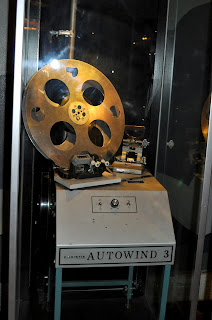 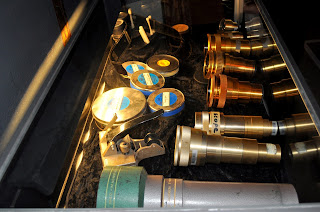 For the more technically minded there are also projectors, film winders, an array of lenses and film types. In it's history Grauman's has shown everything from 16mm to Cinemiracle and now IMAX in the very near future. They are very up on saying the theatre has survived so long by staying current with the times, and that make sense, I'm hopefully they will continue to guard the old as they stay up with the new. 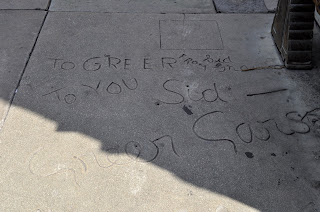 There were so many surprises in the handprint courtyard. For example, Kurt Douglas did his hand prints doing a hand stand and lowered himself to make a print of his famous chin. Unfortunately the cement artist didn't see this and thought it was a smudge and wiped it away. Many of the squares had secret stories. But I think my favorite is the time capsule that is in Greer Garson's 1942 Mrs Miniver square. It has no date for opening but i'st said to have copies of the film and script inside. Too bad we just missed the 70th anniversary....
There are still 110 space left for prints in the courtyard and with an average of just 4 a year, we can look forward to decades more of the ceremonies. I've been lucky enough to attend 3 handprint ceremonies and while they are just silly publicity, they are also a Hollywood tradition in a town that doesn't have many. 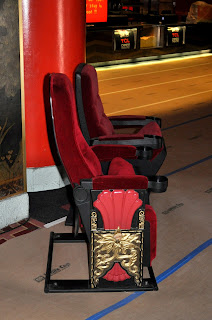 And finally just to feel in the know, these two theatre chairs that were in the lobby during my tour. As someone who has spent hours/days in this theatre watching movies I'm delighted to see them.  Both versions look extremely comfortable. The current side design was on them so we will assume they will make it through the renovation.
For tour times and details go to TCL Chinese Theatre website

This is an awesome stuff, Elise -- I am pea-green with envy (for the second time today!) -- I would LOVE to be able to take that tour. Your post is the next best thing.

Glad you liked it. That's always my goal to share things with people who might otherwise not get a chance to see it.